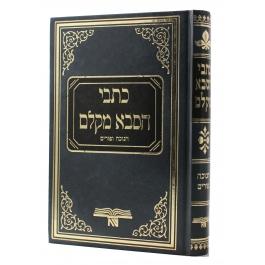 For the Refuah Shleima of Reb Shalom Ben Miriam Rivkah

Perhaps no other Torah personality has had such a dichotomy in terms of impact and obscurity.  Rav Simcha Zissel Ziv Broide of Kelm (1824-1898), was the Rebbe of the Alter of Slabodka, the Alter of Novardik, Rav Yechezkel Levenstein, Rav Reuvain Dov Dessler, and Rav Yeruchem Levovitz.  Essentially, every Yeshiva in Europe, America and Ashkenazic Eretz Yisroel was either started or greatly influenced by the Alter of Kelm’s Talmidim.

And yet, so few people are aware of the details of his life and of the Yeshiva in Kelm.

Rav Simcha Zissel was born in Kelm. His mother was a descendent of the Chachom Tzvi. After he married, he moved to Kovno and studied under Rav Yisroel Salanter in the Nevyozei Kloiz, along with Rav Yitzchok Blahzer and Rav Naftoli Amsterdam.

Rav Yisroel directed Rav Simcha Zissel to travel to Zhagory to strengthen Mussar there and then to Moscow, where he lived for two years.  He moved to St. Petersburg after that for a year and was offered the Rabanus of that city – the largest city in Russia.  He declined it and suggest that they engage Rav Yitzchok Blahzer instead – which they did.

In 1864 he decided to open the Kelm Talmud Torah in order to help further spread Rav Yisroel Salanter’s ideals.  In order to both counter the advances of haskallah as well as create a cadre of Talmidei Chachomim who could lift the banner of Torah Jewry in the Pale of Settlement, he included limudei chol in the curriculum.  Due to problems with government authorities, Rav Simcha Zissel relocated the Yeshiva in Grobin in approximately 1877.

In 1881, Rav Simcha Zissel returned to Kelm and left his son, Reb Nochum Zev in charge in Grobin.  Talmidim came to study under him in Kelm, while he still ran things from afar at Grobin. It was difficult for him to do, on account of illness.  He posed the question to his Rebbe, Rav Yisroel Salanter, as to whether he should close it.  He was told not do so.  Failing health, however, forced him to do so by 1886.

The Alter of Kelm was niftar on the 8th of Av –  26 July 1898.  At his levaya, Rav Eliezer Gordon zt”l, the Rosh yeshiva of Telze, said that he knew every word of rashi and tosfos by heart in more than half of shas and new every siman and sif in Shulchan Aruch by heart.  He further commented, “Aside from his complete gadlus in Torah, I never heard a single word from him that was not Torah or yiras shamayim.”

In his Tnuas HaMussar, Rav Dov Katz delineates three yesodos of learning that the Alter of Kelm taught.

After Rav Simcha Zissel passed away in 1898, the Talmud Torah in Kelm was led by his younger brother, Reb Aryeh Leib Broide (?-1928).  The mishpacha began moving to Eretz Yisroel, but Rav Tzvi Hirsch Broida, Rav Simcha Zissel’s son in law, stayed on to lead the yeshiva until he passed away in 1913. Rav Nachum Z’ev Ziv (1857-1916) took over until his own passing in 1916.  Rav Reuvain Dov Dessler took over from 1916 until 1935.  After his passing, Rav Doniel Moshovitz took over for the next six years.

Rav Nosson Tzvi Wachtfogel, a talmid of Kelm under Rav Doniel Moshovitz hy”d once said, “Whenever my Rebbe, Rav Doniel Movshovitz zt”l, discussed the Alter of Kelm, he would entirely be mevatel his own de’ah, and would instead toil diligently to understand what the Alter meant. When someone asked him why he paid so much effort to do so, he responded:

The glory of Kelm was no more.

The following 11 items are some of the Alter of Klem’s thoughts and sayings: