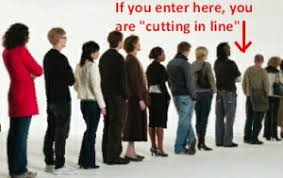 There is such a thing as a “miracle” air flight – where a person who was a wheel-chair bound invalid before he entered the airplane, somehow, through the miracle of air flight, experiences his or her own miracle as well.

Before entering the plane, the passenger was wheeled onto the flight on a wheelchair by an airport employee.  And yet after the flight, somehow, some way, the person developed the capacity to grab his or her carry-on luggage and walk again – with miraculous vigor, strength and vitality.  A “true” modern-day miracle.

One of the repercussions of the Covid-19 epidemic is that the social distancing protocols have led to longer lines.  Unfortunately, we see that not everyone is dedicated to fairness in this respect.  Since today, the 28th of Tammuz, 5780, is the 8th yahrtzeit of Rav ELyashiv zt”l, what follows are Rav Elyashiv zatzal’s views on this topic, followed by the author’s analysis of the term “ligzol zman.”

It is forbidden to steal from the time of another person [ligzol mizmano shel hasheini].  On account of this, it is forbidden to enter without waiting in line – whether it is to a private place or to a public place.

If the person that they are waiting to see wishes to accept a person without him having to wait on line, if he is a private individual – who is not obligated to see people – such as a talmid chochom who has not been officially appointed as working for the Tzibbur – or if he is a private doctor – then it may be done.  But if the person has a public position, such as a Rav Shechunah, or if he is employed in a bank, or some other public office – it is forbidden for a clerk or a driver to advance a particular person before others who were waiting in line. [Piskei HaGrish – HaGaon Rav Yoseph Shalom, Choshain Mishpat p.377-378]

There is an expression that is commonly used known as “gezel sheinah”—“the stealing of sleep.” The meaning is that doing something that either wakes another person up or prevents him or her from going to sleep is an act of gezel sheinah.

BUT IS IT STEALING?

Is this, in fact, really stealing? Is there merit to the use of the term “gezel” to describe this injustice?  It is this author’s contention that there is a debate among the Poskim as to whether the term gezel may be used.  Rav Elyashiv zt”l holds that it is a form of true Gezel, as seen in his use of the term in the cutting of lines.  Rav Vosner zt”l, on the other hand, ruled that it is not and that the term should not be used.

This author would also like to bring possible proofs to Rav Elyashiv’s view that the use of the term is, in fact, warranted, even though other Poskim may have disagreed

Rav Shmuel HaLevi Vosner, zt”l the rav and av beis din of the Zichron Meir section of Bnei Brak, discusses the situation in the seventh volume of his responsa (Shaivet HaLevi #224).

Rav Vosner begins his response with the position that the term “theft” can only truly be used when one steals an actual item and the thief either uses that item or benefits from it. He writes that preventing someone from sleeping is prohibited because one person is not allowed to cause damage to another or to prevent another from realizing a benefit, but there is no actual theft involved.

Rav Vosner admits that there is definitely a proof from Bava Basra 20b that preventing someone from sleeping is prohibited, as well as from Choshen Mishpat siman 156:2 and 3.

The Shulchan Aruch discusses whether someone is permitted to open a commercial store in a residential neighborhood. Rav Karo writes as follows:

“The immediate neighbors may prevent him from opening up such a store and tell him, ‘We cannot sleep, on account of the noise of those who are entering.’ He may only do his work in the house and sell it in the marketplace. However, they may not stop him and say, ‘We cannot sleep, because of the sound of the hammer, or the mill.’ This is because he already began doing this and they did not stop him from doing it earlier.”

Although the parameters of what is permitted in a residential area and what is not are somewhat complex, the essential issue that preventing someone from sleeping is generally prohibited can be established from this ruling of the Shulchan Aruch.

As we have seen, however, there are noted exceptions. In a similar vein, the Shulchan Aruch rules in sub-paragraph three that if someone begins teaching his children Torah in his house, the neighbors may not complain and say they cannot sleep on account of the sound of children learning Torah.

Rav Vosner concludes his response with the idea that the term “gezel” is somewhat of a misnomer.

To back up Rav Elyashiv’s view, however, we do find that Chazal perhaps define the term “gezel” in a broader fashion than Rav Vosner understands it. The term is used in the Talmud (Berachos 6b) in a situation that may not quite be considered “stealing an actual item and using or benefiting from it.” Rav Chelbo quotes Rav Huna as saying, “Whoever knows that the other generally greets him, should greet him first, as it says, ‘Seek peace and pursue it.’ If the other gave him a greeting and he did not return it, he is considered a thief, as it says, ‘For you have devoured the vineyard, and the theft of the poor is in your house’ (Yeshayah 3:14).”

Likewise, the term is used by Rav Chanina bar Pappa (Berachos 35b) regarding someone who eats and does not recite a blessing. It is considered as if he stole from Hashem and from knesses Yisrael. And the term is used in Sanhedrin (91b): “Whoever prevents a student from learning Torah, it is as if he stole his inheritance from him.” In both of these instances, no actual item is being taken and benefited from.

The Midrash Tanchuma (Bamidbar 27) also uses the term to describe someone who quotes a halachah and does not quote the name of the one who said it, in violation of the verse “Do not steal from the destitute for he is destitute” (Mishlei 22:22). The Midrash traces this back to the zugos, and ultimately traces it back to Moshe Rabbeinu from Har Sinai.

Similarly, in a Tosefos in Kiddushin 59a, Rabbeinu Tam’s father, Rav Meir, is quoted as understanding that in a case where fisherman A set out his net and fisherman B afterward set out a net nearby with a dead fish inside (to attract more fish), it is considered as if fisherman B stole from fisherman A—even though the fish had not yet arrived. (Fishermen: please note the fishing advice from Rabbeinu Tam’s father.)

We see that the term theft is used more loosely than as defined by Rav Vosner. Rav Bodner in Mamon Yisrael, page 82, cites a response from Rav Zalman Nechemia Goldberg printed in the Av 5762 edition of Koveitz Beis Aharon V’Yisrael that the case in Berachos 6b (regarding one who does not return a greeting) is considered theft only because it is the negation of a debt. Even though the debt is non-monetary in nature, it is still considered a debt, and the negation of this debt thus falls under the rubric of theft. Rav Bodner extends Rav Goldberg’s concept to include not reciting a berachah and not quoting a halachah in someone’s name. In both of these cases, Rabbi Bodner suggests that there exists a negation of a debt—the debt to Hashem to thank and the debt to the person to give him credit for teaching the halachah.

This extension is somewhat problematic, in that the Talmud also states that there is a theft from knesses Yisrael. Preventing a student from learning is also not exactly a debt, and neither is stealing fish that have not been caught yet.

Thus we are suggesting that based upon these sources, the commonly used expression of gezel sheinah is, in fact, appropriate. It is not exactly full monetary gezel, but rather a lower-level form of it.  By the same token, cutting in line, is also considered a lower form of stealing and should be avoided just as we avoid gezel.