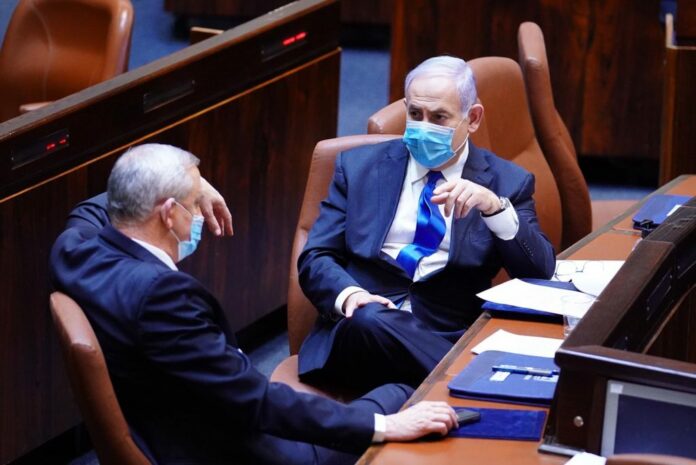 Blue and White want to stick to the coalition agreement, fearing that Netanyahu is aiming to dissolve the government before Gantz gets his chance to serve as prime minister.

“In order to stabilize the government, a 2020-2021 plan is needed,” Blue and White chairman Benny Gantz told Channel 12 News on Motzei Shabbos. ” Not a holiday budget or a weekend budget, but a budget for an entire year. The best economists say the same thing and that’s why we’re insisting on it…I won’t concede on this.”

Both parties announced the meeting’s cancellation, with each blaming the other for the decision. Likud attacked Blue and White for harming the public since the cabinet was set to vote on a NIS 8.5 billion ($2.5 billion) coronavirus financial aid plan for Israeli citizens proposed by Prime Minister Binyamin Netanyahu‏‏ and Finance Minister Yisrael Katz at the cabinet meeting on Sunday.

“The cabinet meeting will not convene tomorrow due to Blue and White’s refusal to put a government financial aid plan by the prime minister and finance minister on the agenda,” Likud stated.

“The plan will create about 10,000 new jobs to improve the economy. Likud demands that Blue and White refrain from thwarting the transfer of funds to the citizens of Israel at this time, when it is dealing with the coronavirus crisis.”

Blue and White responded that the meeting was canceled due to “due to Likud’s insistence on not adhering to the coalition agreement. This is not the first time Likud has not stood by its commitments, and every other excuse is a complete lie to the Israeli public.”

If a national budget is not passed by August 25, the government will be dissolved and new elections will be called.