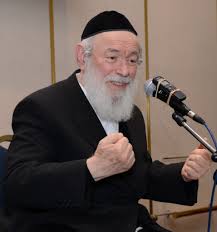 A question was recently posed to Rav Yitzchok Zilberstein:

In Israel, there is something called VAT or Value Added Tax.  In Hebrew it is called Mas Erech Musaf and it is 17% in Israel.  A person went to a store and noticed that an item that normally sells for a thousand shekels was on sale for nine hundred shekel.  The store also had a different sale going on as well – and that was a No VAT Day.  The person calculated that the item would end up costing him 750 shekels (actually 747).  When he went to pay they informed him that one may not combine two sales together in one and that he may have the No VAT Day price of 830 shekels.  The consumer said, “That would be fine if you had such a sign posted – but there is no indication that taking advantage of two sales is not allowed.  You must, therefore, give it to me for 750.”  The cashier pushed him off to the manager and they stalled and stalled.  After having waited twenty minutes the consumer decided to take a little initiative.

He began coughing and coughing in such a manner that people might think that he was carrying COVID-19.  The manager came out and asked what he wanted.  The consumer explained the matter of the two simultaneous sales and that there was no sign.  The manager, wanting to get rid of him, said that he could have it for the 750 shekel price.

Later, the consumer told a friend of his about his coughing trick and his friend responded:  “You have a serious halachic question on your hands as to whether it was permitted to do so.  You need to ask a Posaik.”

Rav Zilberstein ruled that the consumer had violated the severe prohibition of Gneivas Daas, deceiving others, and that he must return the 80 shekels forthwith (Vavei HaAmudim Elul 5780, p. 18).

AN OVERVIEW OF GNEIVAS DAAS

This author would like to provide a general overview of Gneivas Daas, because its parameters are not so well known.

The prohibition of Gneivas Daas means fooling or deceiving others in physical practice. The Gemorah in Chullin (94a) cites Shmuel as saying that the prohibition applies to everyone.

The Gemorah in Chulin 94a cites a Braisah which discusses four examples given by Rabbi Meir of things that are forbidden on account of the issue of Gneivas Daas.

3] It is forbidden to appear to up a new barrel of wine (when one is actually opening it for a previous sale) unless one informs him of the real reason he has opened it [the underlying issue is that the wine will not last as long now that the barrel is open and it is a big favor to the guest, much like opening a brand new bottle of Blue Label would be nowadays]

4] It is forbidden to offer someone oil from an empty flask to anoint oneself when one knows full well that the person will refuse it. If, however, he is offering the oil to show (others – Rashi) his fondness for the person it is permitted.

We see, therefore, that Gneivas Daas is violated even if there is a non-financial deception.

In regard to the verse of midvar sheker tirchak stay away from a false matter, there is a three way debate as to how we understand this pasuk. The Chofetz Chaim rules in his Ahavas Chessed that there is an out and out prohibition to lie. This is in accordance with the view of some Rishonim. Other Rishonim hold that the verse is merely good advice, but not halacha. A third opinion holds that it is applicable to judges adjudicating law. Generally speaking, the view of the Chofetz Chaim is normative halacha.

The Mishna in Bava Metzia (59b) tells us that it is forbidden to mix older produce with newer produce and sell them together as one package. This is a parallel to our case, but our case is worse since in the whiskey only the inferior product is being presented. The Gemorah in Bava Metziah 60b has more cases where a seller makes animals and animal skins look newer through artificial means. These too are forbidden on account of Gneivas Daas. While it is true that these cases in Bava Metziah are dealing with a sale, but if we combine this with the Braisah in Chullin then we have a parallel.

Does everyone agree to this? It would seem that it may well be a debate in the Rishonim. The Rashba in Chullin (94a) and the Rosh (Perek 18) hold that if the item is a matana, a gift – there is no prohibition of Gneivas Daas. Tosfos (Chullin 94b DHM “Amar”) and the Ritva (Chullin 94b “Rav Ashi”) hold that it does apply even by a free gift. How do we understand the distinction between the cases of the braisah and the free gift according to those authorities who hold that it is not considered Gneivas Daas? It would seem that since the deceiver is giving something to the person – that makes up a bit for the deception.

OTHER APPLICATIONS OF GENEIVAS DAAS

There are a number of other contemporary applications of this prohibition that apply according to all Rishonim. These applications apply across the board in numerous industries.

In the age of the internet, a number of people adopt other identities. While anonymity is permitted, when it is used to give off the impression that person X is really someone else – this is clear Gneivas Daas. There are magazines and newspapers that do this as a matter of course, where letters to the editor are printed by an author of an article that he himself had penned.

Sometimes a newsmagazine or paper will create a false headline to get the reader to read the story. This too is a violation of Gneivas Daas. It further causes the reader to waste time, if that is not what he or she would have wanted to read. In the modern internet age or on FaceBook, there is something called “Clickbait.” Headlines are designed to lure the reader into clicking and reading. This is permitted as long as there is no Gneivas Daas involved.

If a company produces a product, they will often be tempted to write their own reviews and post them on Amazon.com. This too would clearly be a case of Gneivas Daas. It falsely gives off the impression that there are more readers as well as falsely inflating up the rate of satisfaction.

There are websites and papers that falsely report their internet traffic or distribution. This too is Gneivas Daas, deceiving those who think that the site receives more visitors than it actually does, or deceiving its advertisers. Falsely inflating how many issues are printed is also Gneivas Daas.

There is a fascinating Shaarei Teshuva (3:181) which states that the leniency of “Mutar l’shanos mipnei haShalom, sometimes it is permitted to tell a white lie to maintain peace” does not apply to Gneivas Daas. Gneivas Daas is an important and essential value in Torah Judaism. Whether it is pouring Red Label into a Blue Label bottle, or inflating web hits, printing numbers, or using false emails to create wrong impressions, we must realize that it is a serious halachic issue that should not be ignored or trampled upon.

ONLY $3500 LEFT!  THERE IS A YOUNG LADY IN A DIFFICULT FAMILY SITUATION THAT DESPERATELY NEEDS TO GET TO SEMINARY IN ERETZ YISROEL.  IT IS NEAR PIKUACH NEFESH ACCORDING TO HER TEACHERS.  IF ANYONE IS IN A POSITION TO FINANCIALLY ASSIST PLEASE CONTACT THE AUTHOR.