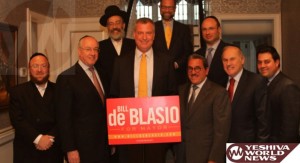 De Blasio has made the tax hike, which would fund universal prekindergarten, the centerpiece of his campaign. He said that if he is elected in November, he wants the increase in the state’s next budget, which is due in April.

The plan needs the support of the state Legislature and there is skepticism that Cuomo and Albany lawmakers would support a tax hike just months before they come up for re-election.

“My conversations with Gov. Cuomo have been very broad,” de Blasio said at a news conference at an East Harlem early education program. “He’s expressed an openness to this specific proposal. And I think there is going to be a lot of public support and that is going to make a huge difference.”

De Blasio was dismissive of the idea that he should consider delaying the tax hike to a future budget.

“This is a major, major priority,” said de Blasio, the city’s public advocate. “We’re going to work on it immediately. It’s not that I don’t understand there’s a lot of work to do but my goal is get this approved as part of the budget.”

Cuomo, who has endorsed de Blasio, said two weeks ago that he would not weigh in on the plan until he knew its specifics. His spokesman said Monday that position still stood. A timeframe was not given.

De Blasio’s Republican rival, Joe Lhota, has predicted that the plan will never be approved. Lhota, the former MTA chairman, has said he’d raise the estimated $500 million needed to launch the program by instead making cuts to the city budget.

De Blasio also revealed a previously private personal detail Monday, that his father committed suicide in 1979 when the candidate was a teenager. In a statement, de Blasio’s campaign said his father had terminal cancer at the time.

The statement was aimed at pre-empting a New York Post story about the suicide, which was published a short time later.

De Blasio does not often speak of his father, an Army veteran named Warren Wilhelm, other than to say he struggled with alcoholism and was largely absent from his son’s life. De Blasio, who was born Warren Wilhelm Jr., later took his mother’s maiden name as his last name.