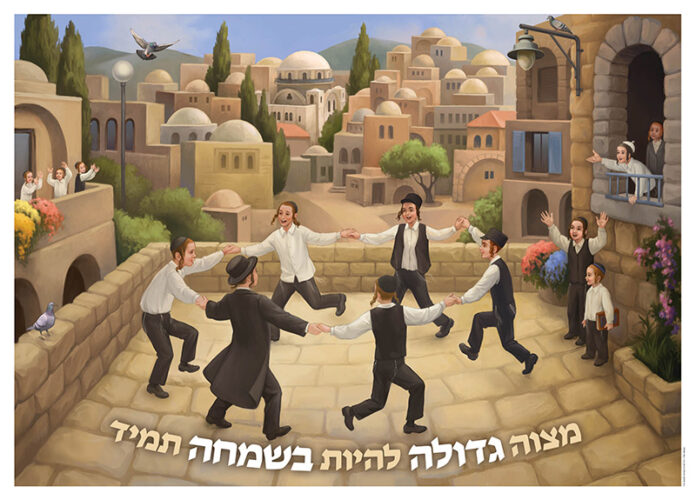 It is a song that we hear pretty regularly:  “Mitzvah Gedolah lihios b’simcha – lihios b’simcha tamid.”   The statement is so well-known that it is often mistakenly identified as a Gemorah or early Maamar Chazal.   Indeed, Rabbi Yehoshua Kurland from Sh’or Yoshiv says that it is the only song that ever became a Pasuk.

But is true?  Is there really a Mitzvah to always be happy?  How does this fit in with mourning  over the Beis HaMikdash, a lost relative, begging for forgiveness for an Aveirah, etc.?

Also, what about those that survived the holocaust?  Especially right after the devastation and the knowledge that the bulk of their family and all they knew were murdered?

And, if it is true – where do we first encounter it?

There will be attempts to state that it is not a contradiction – in that one can still maintain a state of happiness even in dire situations.  We will see that, at least according to some authorities, this is not correct.  The Berditchever Rebbe’s view, to be described later, is a case in point.

The first place to look is in Dovid HaMelech’s Tehillim.  In Tehillim (100:2) we find the words, “ivdu es Hashem b’simcha – serve Hashem in a state of joy.”  And although the Alshich states that we should always be in a state of joy when serving Hashem – there is still the qualification that it when we are serving Hashem – in other words, performing Mitzvos.  But let’s say that we are doing something else.  Are we permitted to not be in a state of Simcha?  And who says that it is still a  Mitzvah Gedolah?

THE VIEW OF THE BERDITCHEVER

The Berditchever in the beginning of Parshas Vayaishev (Kedushas HaLevi) does extend it to always being in such a state – but he writes that it is only when he perceives that Klal Yisroel has good in this world.  Otherwise, he writes, a person is obligated to partake in their sorrow.   We see from his words that he does not agree with the resolving the contradiction view.

There is a concept of “same’ach b’chelko – being happy with one’s lot in life” – but this may not necessarily mean that this means that one must constantly be in a state of happiness.  The Menoras HaMeor (chapter 14) writes that whomsoever is happy with his or her lot is in a constant state of happiness – but once again, this does not mean that it is a Mitzvah per se.  It could be that it is a reward.

This author is of the opinion that the idea is first found only in Chassidishe seforim, and that it was initially introduced as an effective counter-measure to the debilitating effects of depression.  When one is depressed the shechina does not reside in him.  The Noam Elimelech on Parshas BaMidbar explains that the Torah tells us that one must be in an Ohel Mo’ed in the tent of a Yom Tov – i.e. in a state of happiness – in order that one have the Shechina be with him.

In a similar vein, Rav Tzvi Hirsch of Nadvorna, a prime student of the Maggid of Mezerich writes in his Alpha Beita (simcha) that one should be in a constant state of Simcha in order to always be able to perform his Mitzvos, his learning, and his Tefillah in a state of joy and zrizus – alacrity.  In other words, it is kind of a hechsher Mitzvah but he did not state per se that it is a full Mitzvah, much less a Mitzvah Gedolah.

The expression as we know it originates with Rav Nachman of Breslov (1772-1810) in his Likkutei Moharan 2:24).    This author would like to suggest an alternative understanding of Rav Nachman of Breslov’s formulation that does not contradict the fact that we do not find earlier mention of the idea.

But before this, a brief overview is in order. During Rav Nachman of Breslov’s times, sadness filled the air.  Disease, hunger, famine, and poverty were everywhere.  Indeed, both Rav Nachman’s wife and he, himself, died of Tuberculosis at a very young age.  Rav Nachman of Uman passed away at 38 years of age.

Being in a state of depression depresses other people.  Being in a state of happiness cheers people up (within reason, of course).  Cheering and uplifting the spirit of others is a Mitzvah of v’ahavta l’rayacha kamocha – loving your neighbor as yourself.  Rabbi Akiva says that this is a Klal gadol baTorah – a great principle in the Torah.   Being in a constant state of happiness allows us to perform the Mitzvah of v’ahavta l’rayacha kamocha in a flash – especially during dark times.  During this period of COVID-19, this is especially applicable.  We must keep in mind that it is always proper to try and cheer up and uplift others.

The picture used above is courtesy of adirposters.com