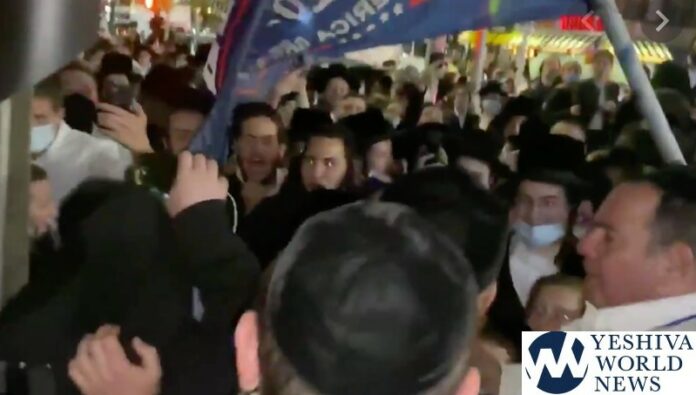 Jacob Kornbluh, a reporter at the ‘Jewish Insider’ tweeted that he will be filing charges against Boro Park Community Activist Heshy Tischler for ‘incitement and physical assault’.

Kornbluh tweeted that he was a hit in the head and kicked while being called a “Nazi” by what he called an, “angry crowd of hundred of community members.”

A video (attached) shows Tischler calling Kornbluh a “Rat” and a “Moiser” and encouraging the crowd to do the same – exclaiming, “Everyone say moiser!”

At the time of YWN publishing this article, it had already turned into a national story, with many, many elected officials condemning the incident, as well as news reporters publishing videos on Twitter.

It’s not the first time Kornbluh has raised the ire of the community for highlighting coronavirus infractions, after reporting in April on a synagogue that was operating despite the lockdown.

Kornbluh and two other community members were targeted in fliers put up around the neighborhood declaring them “mosrim”.

I want to thank the people who got in harm’s way — and might have gotten injured — to protect me. I am filing charges against Heshy Tischler for incitement and physical assault and will seek charges against any individual who hit me.

What an embarrassment/Chilul HaShem. Disgusting behavior!
Glad the police and community members stepped in.@jacobkornbluh I hope you are ok. https://t.co/ZYo9O5nHzh

Here’s Heschy egging then on. “He’s lucky time be alive,” one of the protesters told me after.

A few yards away, cops agree to close more streets, joking around with same men who just beat up a reporter pic.twitter.com/UekTnKQqrA

MY STATEMENT REGARDING RECENT EVENTS IN BORO PARK. pic.twitter.com/Z1BQIeckcW

This is terrifying news from @jacobkornbluh. While this may be a small minority within a small community, it is disgusting and those responsible must be held to account for such violence. https://t.co/UnpNaFBuPF