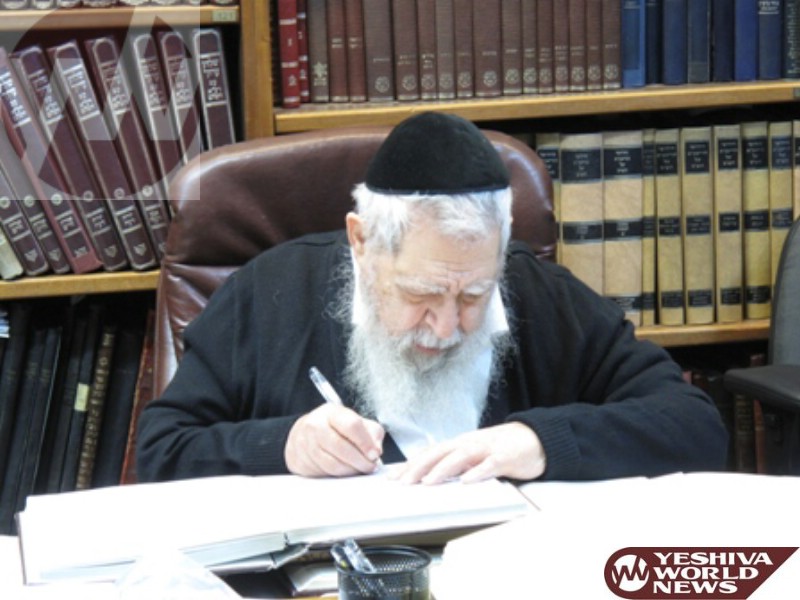 On Sunday night the doctors decided to place him back into a medically induced coma and on a respirator in the hope of stabilizing his condition and permitting his frail body to heal. A systemic blood infection was diagnosed earlier in the day. During the night the gadol hador’s condition took a dramatic turn for the worse and earlier this morning, the rav’s family was summoned to his bedside.

Rav Ovadia Yosef was born in Baghdad on September 23, 1920, and came to Eretz Yisroel with his parents at the age of four and settled in Yerushalayim.

By the age of 20 he received Semicha, and for two years in the late he served as the deputy Chief Rabbi of Egypt. In 1973 he became Chief Sephardic Rabbi of Israel, and remained in the position until 1983.

In 1947 Rav Yosef was invited to Cairo by Rabbi Aaron Choueka, the founder of Yeshiva ‘Ahavah V’Achva, to teach in this yeshiva. Rabbi Yosef also served, at the request of Rabbi Ben-Zion Meir Chai Uziel, as head of the Cairo Beis Din.

Rabbi Yosef found that religious observance among both the Jewish community at large, and its leadership, including the local rabbis, was lax. One of the major halachic issues was the lack of any organized system of kashrus, which led to conflict between him and other members of the community. Following these events Yosef resigned from his position, two years after having arrived in Cairo. Approximately one year after his resignation, he returned to what, in the meantime, had become Israel.

After returning to Israel, Rav Ovadia studied at Yeshivas Bnei Zion, then headed by Rabbi Tzvi Pesach Frank ZT”L. He also served on the Petah Tikvah Beis Din. His boldness as a posek was already revealed in his first term as a dayan when, at the age of 30, he wrote a psak permitting yibbum instead of chalitza which contradicted a psak made by the Chief Rabbinate of Israel a year earlier which had forbidden yibbum.

In 1951–1952 he published his sefer on Hilchos Pesach, Chazon Ovadia. The sefer was lauded by many gedolim, including the two Chief Rabbis at that time, Rabbi Bentzion Meir Chai Uziel and Rabbi Yitzhak HaLevi Herzog. Two years later he founded Or HaTorah Yeshiva for gifted Sephardic talmidim. This yeshiva (which did not remain open for long) was the first of many which he established, later with the help of his sons, in order to facilitate Torah chinuch for Sephardim and establish the leadership of the community for future generations.

In 1953-4 and 1955-6 he published the first two volumes of his Magnum Opus Yabia Omer, which also received much praise.

Following is a link to photos from the gadol hador’s 90th birthday celebration: