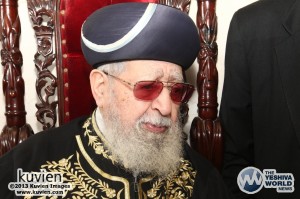 The Yeshivas HaMekubalim Ohr Rashbi in Meron in conjunction with Kol Berama Radio has undertaken to make a siyum Shas every day during the shiva for Maran HaGaon HaRav Ovadia Yosef ZT”L . The siyum heard earlier in the week was aired by Avi Maimon for 2,711 people who learned all day until 18:00 as an aliyah for Maran’s neshama ZT”L.

The phone has been ringing off the hook as thousands are committing to learn dafei Gemara in memory of the gadol hador.