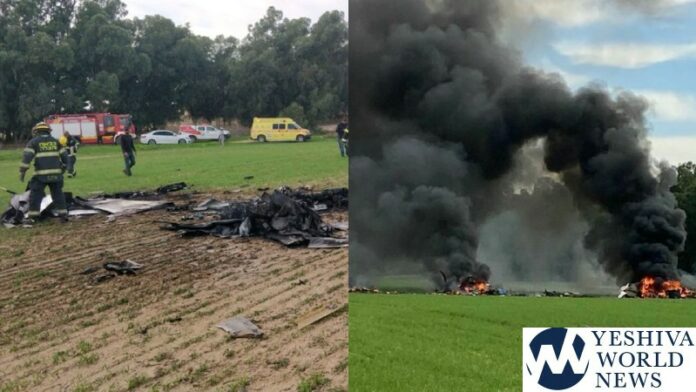 Two men were killed on midday Tuesday when their light plane crashed in an open area and burst into flames near Kibbutz Mishmar HaNegev, north of Be’er Sheva.

The two were identified later as an Israel Air Force (IAF) officer and cadet. The officer had served as the commander of an F-16 squadron until recently and the cadet has been training as a cadet for the past four months. The aircraft was a ‘Snunit’ Grob G 120A plane commonly used for pilot training.

IAF commander Amikam Norkin ordered that a team be formed to investigate the incident and has halted all training flights until further notice.

Israel’s Fire and Rescue Services, Magen David Adom, and an Israel Air Force helicopter arrived at the scene and pulled the two men from the crash site for medical treatment. But unfortunately, it was too late and they were forced to declare their deaths at the scene

“At 11:32 a.m. the MDA emergency 101 call center received a report of a plane which had crashed near Mishmar Hanegev,” Magen David Adom stated. “MDA paramedics and first responders report that there were two men found unconscious.”

“We arrived at the scene and saw the plane burst into flames,” said Ichud Hatzalah volunteer Yanky Weinberg. “After we extinguished the fire we saw the difficult scene [the critically injured men] and the parts of the planes scattered throughout the area.”

Officials have not yet been able to identify the plane due to the extensive damage suffered during the crash and ensuing fire.