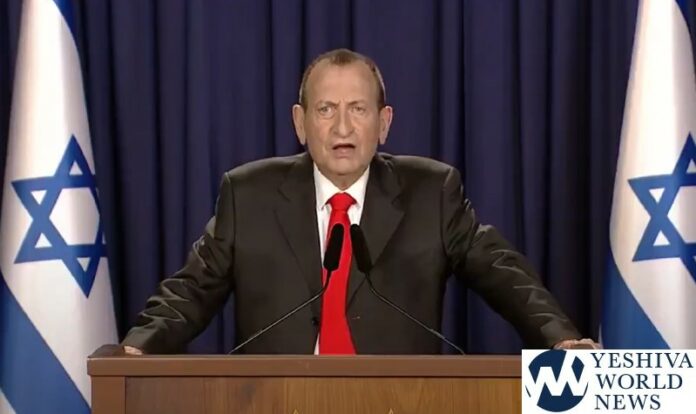 Justice Minister Avi Nissenkorn informed Blue and White chairman Benny Gantz on Tuesday that he is leaving the party and joining Tel Aviv Mayor Ron Huldai, who announced on Tuesday evening that he is running for the Knesset.

Nissenkorn also had offers from Yesh Atid and Labor but turned them down.

Later on Tuesday, Foreign Minister and Blue and White leader Gabi Ashkenazi announced he is taking a break from politics and will not be running in the upcoming elections.

Tel Aviv Mayor Ron Huldai announced his debut into national politics on Tuesday night and launched his new political party – “The Israelis” – with Nissenkorn by his side.

In his press conference, Huldai says the problem is that “we have grown accustomed” to Netanyahu’s corruption and divisive style of leadership, promising he will extricate Israel its current despair.

“We have grown accustomed to a crazy government. I will no longer stand idly by, I am here to announce a new party,” he said, recounting his history as an IDF fighter pilot, an educator and mayor of Tel Aviv.

Huldai, 76, has served as the mayor of Tel Aviv for the past 22 years. He announced his intention to run for Knesset in August.

Another Blue and White MK, Michal Cotler-Wunsh, announced earlier on Tuesday that she is not running with Blue and White in the upcoming elections. Blue and White MKs Asaf Zamir and Miki Haimovich also left the party earlier this week and MK Ram Shefa is also expected to leave.

As more and more politicians leave Blue and White and amid polls showing the party has lost appeal to the Israeli public, Benny Gantz also made an announcement on Tuesday night, informing the public that Blue and White will run in the next elections with him at its helm.

Kara, who served as Communications Minister from 2017-2019, was the first Druze politician to serve as an Israeli minister.