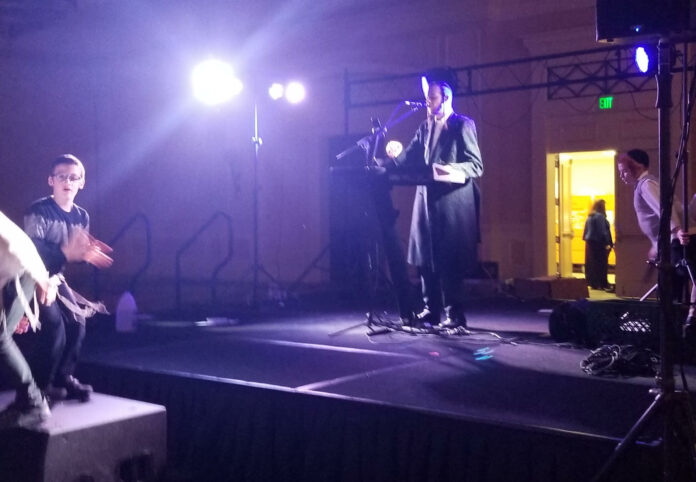 They arrived on Thursday before Shabbos.  Seventy young “special needs” children under the care of the Yaldeinu Organization, with seventy counselors in tow – that’s one on one for those who didn’t catch that, and each group of six counselors has a group leader.  Many of the counselors and group leaders are from the Five Towns.

Yaldeinu utilized a federal program that provides a “respite” for special needs students.  So why not hold that yearly respite in Orlando Florida?  The only downside is that the federal program does not pay for flight transportation – but with tickets to Florida at two hundred and fifty dollars each – why not?

And so with the majority of costs covered – numerous house in the Solterra resort – fifteen houses were rented and the “special needs” kids were given the opportunity to have the time of their life.

They arrived on a Thursday.

“We filled up the entire JetBlue flight almost – 125 seats out of 150. A huge kiddush Hashem was made,” remarked Tova S., a group leader who is also a speech therapist for Yaldeinu.  “They behaved so nicely and the staff of Jetblue was so impressed by how the counselors took care of the kids.”

After their arrival, they ate supper and then went to bed.  Each of the fifteen houses that were rented was given a name by color, the red house, the blue house, the green house – etc.

The minyanim were held in the black house, and numerous other frum families joined in.  The Yaldeinu administration even allowed for an earlier mincha to accommodate the litvish guests who wished to eat eat Shalosh Shidus with their families before Shkiya.

On Friday, they went to Showcase of Citrus for orange-picking and a tractor ride.  They fed animals and had a grand-old time.

Shabbos was very special.  They had a makkos show because it was Parshas Bo.  They also brought someone to do a magic show.  There was also a talent show.

Motzaei Shabbos there was a Don Stern concert at Omni Resport and three buses were rented to transport the kids.  Don Stern sang all of the up-and-coming songs.  The kids were dancing and French Fries were served as well.

Every day there is swimming on the schedule and then a trip.  On Sunday the plan is to go to Legoland; tomorrow Busch Gardens; Tuesday, Seascreamer; Wednesday SeaWorld and on Thursday it is back to New York.

“Each of the counselors was incredibly loving,” remarked T.H., a young lady who was vacationing and was so enamoured with the organization that she volunteered to help the counselors over Shabbos.

The founders of Yaldeinu prefer anonymity, but essentially, they saw a need and decided to address it.  Currently it is run by the founder, her husband, and their children.

“The Yaldeinu school is heimish and super-professional,” continued Tova S., “If, for example, a child needs drum lessons – the administration makes it happen.  The administration treats the staff incredibly well, taking them out every month.”

“The yearly program is staffed by a remarkable cadre of professionals, OT’s, PT’s, Speech therapists, but when they come to Orlando, they play a totally different role,” observed this author’s daughter, Shira.  “One of the speech therapists, for example, is running the kitchen.”

“The kids wait for this trip since the beginning of the year,” observed one of the counselor leaders. One can imagine that the parents are pretty excited about it as well.

For more information on this remarkable organization, see their website at https://www.yaldeinu.net.