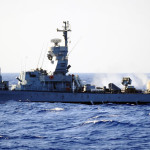 According to a report from a Syrian human rights organization operating in Britain, a base in northwestern Syria was destroyed in an attack, apparently from the sea.

According to the Walla report, which is not confirmed by official Israeli sources, loud explosions were heard in a Syria air defense command base in the Latakia area in northwestern Syria during the night between Wednesday and Thursday, 27 Cheshvan 5774. The base is located in a village called Snubar Jabala and it was totally destroyed.