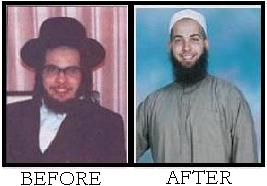 A New Jersey man who co-founded a radical Islamic website has pleaded guilty to using the Internet to make threats against Jewish groups.

Al-Khattab, who converted from Judaism and was previously known as Joseph Cohen, is the third person connected with Revolution Muslim to be convicted in federal court in Alexandria. Morton and another man, Zachary Chesser, admitted using the site to deliver thinly veiled threats against the creators of the “South Park” television show for perceived insults to the prophet Muhammad.