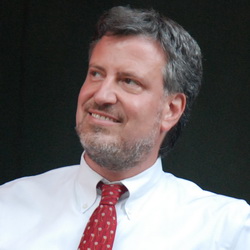 New York City mayoral hopeful Bill de Blasio, who has campaigned as an advocate for those left behind by the economic prosperity that has made the contrast between the have’s and have not’s increasingly stark, is poised to win a landslide victory on Tuesday to follow Michael Bloomberg into City Hall.

The victory would be a huge boost for New York Democrats, who have been locked out of City Hall since 1994 despite a six-to-one voter registration advantage over Republicans, and could be the biggest margin of victory since 1985, when Democratic Mayor Ed Koch won a third term with a three-to-one margin.

De Blasio, a liberal Democrat who is the city’s public advocate, has the support of 65 percent of likely voters while Republican rival Joe Lhota, who was a deputy mayor under former Mayor Rudolph Giuliani, has 24 percent, according to an NBC 4 New York/Wall Street Journal/Marist Poll released on Monday.

Marist pollster Lee Miringoff said there is every reason to expect a lopsided de Blasio victory as voters look to turn the page after Bloomberg’s three terms in office.

“There was a fatigue after 12 years, and de Blasio represented that both in style and substance,” said Miringoff.

De Blasio, an experienced political operative who stands 6-foot-5, managed Hillary Clinton’s successful 2000 campaign for the U.S. Senate and went on to serve two terms as a liberal member of the New York City Council. He bolstered his profile in 2009 as a leading critic of the temporary term limits change that allowed Bloomberg—who originally won office as a Republican and later became an Independent—to seek a third term.

De Blasio went on to become public advocate, heading up a small office that offers a bully pulpit for ambitious officials with an eye on City Hall. In that role, he became one of the loudest and most dogged critics of the controversial stop-and-frisk police tactic that Bloomberg has championed to combat crime.

In July, de Blasio was arrested with more than a dozen others protesting the possible closure of a hospital in Brooklyn.

Lhota, an experienced public servant who most recently headed the Metropolitan Transit Authority during its response to superstorm Sandy, argues de Blasio lacks management experience and that his policies would lead to a spike in crime.

Lhota has embraced much of Bloomberg’s legacy on policing, saying the next mayor should do more to explain the use of stop and frisk to its critics, including those who accuse the police force of racial profiling in low-income parts of the city.

Until late July, Weiner, a late arrival to the race who was eyeing a political comeback two years after resigning from Congress in a sexting scandal, appeared to be running away with the Democratic primary.

Then, a woman came forward with racy pictures and exchanges she had shared with Weiner as recently as a year before – sending Weiner’s popularity into free fall.

Meanwhile, Quinn, who would have been the city’s first female and lesbian mayor, seemed unable to defuse voters’ anger over her role in the temporary change in the city’s term limits law that enabled Bloomberg, herself and other elected officials to seek a third term.

A month before the primary, de Blasio began to surge – eventually passing the 40 percent threshold needed to avoid a potentially damaging Democratic run-off. Voters appeared to respond to his concrete policy proposals, including a plan to raise taxes on the city’s highest earners to expand access to pre-kindergarten programs.

“There is no Republican party,” long-time Democratic consultant Hank Sheinkopf said of the race. “Republicans tend to win in New York City only when there’s a crisis. For Giuliani, it was crime, and for Bloomberg it was 9/11. No such circumstance exists, so the city has reverted to form.”