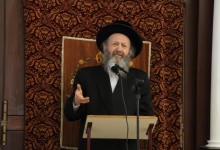 The Mora D’asra of London’s Kedassia Kehilla, HaGaon HaRav Ephraim Padwa Shlita, was transported to a local hospital after collapsing at a chasenah taking place in the Yesod Hatorah hall.