A Belgian court ruled this week that a gold processing factory located in the Chareidi neighborhood in the center of Antwerp must vacate the area within three years, B’Chadrei Chareidim reported.

In June, the gold factory, Value Trading, applied for a 10-year extension on its license, prompting the campaign against it.

Askanim published leaflets with maps marked with dots indicating the high number of residents living near the factory who have contracted cancer in recent years and even died.

Relatives of two members of the kehilla who passed away of cancer in the last two years told B’Chadrei that when they accompanied their relative to the UZ Leuven University Hospital, the professor asked them: “Do you live in the area near the gold-processing plant? This is already the second case of this disease in the area.”

An almanah of a Chareidi resident who passed away recently of cancer told local media: “What else can they tell me? My husband is dead. I was left alone with eight children.”

Other residents told the media: “We know dozens of people who were diagnosed with cancer. How many more victims will there be? A plant like this doesn’t belongs in the center of the city. If our government is really so committed to environmental issues, how can this plant still be allowed here?”

Several weeks ago, Chareidi askanim in the city organized a protest against the factory that was attended by thousands, including dozens of Rabbanim and community leaders alongside environmental activists and politicians from the Belgian general community. Askanim and activists also filed numerous legal petitions against the factory. 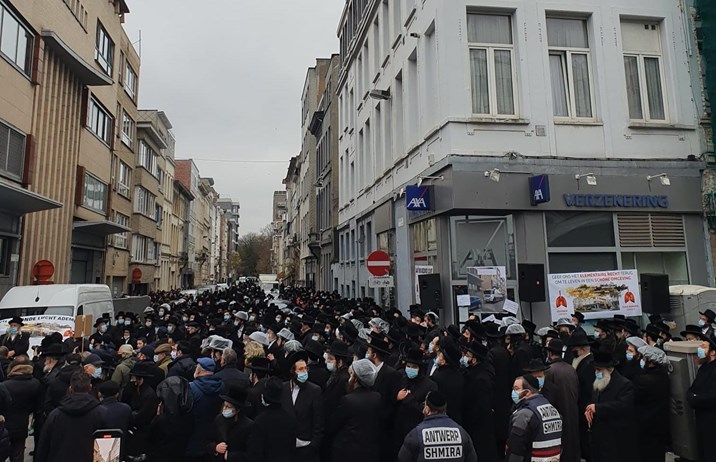 The ba’al chessed Shlomo Zeifman led the campaign, enlisting the support of local Rabbanim and organizing the protest.

Zeifman told B’Chadrei that the Chareidi representative in Belgian parliament Michael Freilich is the one who deserves the credit for the victory as he did everything in his power in the battle against the factory’s continued presence in the neighborhood. Zeifman noted that the factory’s owner can still appeal the decision but if it does so, they are ready to relaunch the campaign in full force. He added that the factory owner is an oligarch with much power and influence over key government officials, which made the battle against the factory extremely difficult and therefore the court’s decision in the community’s favor has caused great excitement and satisfaction.