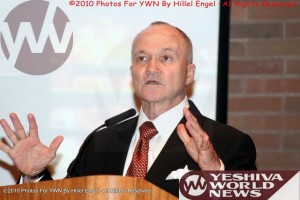 New York’s longest serving police commissioner is going into public speaking after he leaves the department at the end of the year.

Police Commissioner Raymond Kelly said in a statement released by the Greater Talent Network on Monday that he was looking forward to the new opportunity.

“I’m looking forward to sharing the lessons I’ve learned leading the finest police force in the world as we met countless challenges every day,” he said in the statement.

“As a speaker, Commissioner Kelly’s wisdom will inspire and inform, and provide vital lessons toward understanding the role of leadership in a complex world,” said talent network head Don Epstein.

Kelly was police commissioner from 1992-1994, and has held the post since 2002 under Mayor Michael Bloomberg. Under his watch, crime has dropped to record lows, and the city avoided a terror attack. But minorities say they felt targeted by the department’s stop-and-frisk policy.

William Bratton takes over the NYPD Jan. 1. He was chosen by mayor-elect Bill de Blasio.