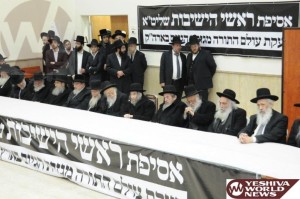 Hundreds of roshei yeshiva shlita gathered at the urgent kenos in Bnei Brak on Monday night the eve of 14 Teves 5774, along with the Moetzas Gedolei Yisrael of Degel Hatorah, to discuss the imminent passing of a new chareidi draft law. The kenos was headed by HaGaon HaRav Aaron Yehuda Leib Shteinman Shlita.

The main topic of discussion was to determine the level of cooperation of the chareidi tzibur in light of government sanctions against the same community for non-compliance with the draft law. The Shaked Committee, which is responsible for finalizing the law, is now trying to determine if the penalty for non-compliance will be penal, financial or possible components of both.

In the best of scenarios, avreichim may lose significant aid in the form of tax, rent and other discounts, as well as monthly stipends, all part of the package that permits them to live a modest lifestyle while devoting themselves to limud Torah.

The gadol hador did not mince words, telling the rabbonim “without Torah there is no nation. Without limud Torah and continued study there is no nation! They want to wipe out Klall Yisrael. We must seek to prevent this and fight against it so that this plan is not implemented.”

HaGaon HaRav Piltz, Rosh Yeshivas Yifrach spoke out against the gezeiros well, followed by a number of other prominent rabbonim and roshei yeshiva.

CLICK HERE FOR A PHOTO ESSAY AT THE KENOS