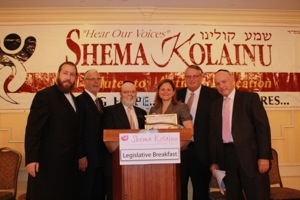 Councilwoman Melissa Mark-Viverito declared victory Wednesday night in the race for City Council Speaker, touting a list of 31 members who have publicly pledged their support and vote on January 8th, 2014.

“I am humbled to have the support and confidence that my colleagues have placed in me. Today is the culmination of over two decades of my work at the grassroots, in non-profit organizations, in labor and as a public servant,” Mark-Viverito said. “I know that my fellow members will work with me in the City Council to create more inclusive legislative body where every member’s voice is heard and validated.”

Ms. Mark-Viverito was the first Council member to endorse Bill de Blasio’s mayoral bid, and she would be the first Latina to hold the second most powerful position in New York City.

“I am thrilled to support Melissa Mark-Viverito as the next Speaker of the New York City Council,” said Brooklyn councilman David Greenfield. “I’m especially pleased that all of the Brooklyn members are unanimously supporting Melissa. Having spent a lot of time with Melissa, including during a trip to Israel, I can attest to her integrity, conviction and deep understanding of the needs of all New Yorkers. I look forward to working with her and Mayor-elect de Blasio to make great things happen for our City.”

Council Member-elect Chaim Deutsch, representing the Jewish community in Flatbush, also offered his support to the presumed council Speaker. “Today, I join a group of committed public servants to help move our great city forward under the leadership of Councilwoman Melissa Mark-Viverito, who has personally pledged to work with me to benefit my constituents, and the district that I represent,” he said.

“Under her leadership, the City Council will enact rules reform, become a more inclusive and effective voice for all our communities, and pass progressive policy to create a more just, compassionate and equal New York City,” added councilman Brad Lander.

Williamsburg Councilman Steve Levin expressed his confidence that Ms. Mark-Viverito “will bring that dedication to equality and fairness with her to the Speakership so that every New Yorker has a fair deal.”

The full list of current and incoming members declaring their backing for Mark-Viverito is below:

Councilman Dan Garodnick from Manhattan, Ms. Mark-Viverito’s chief rival, refused to concede defeat. “We’re going to elect the next speaker on January 8, and it is a little premature to declare victory here,” he told The Daily News.