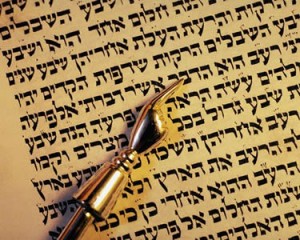 “It’s not fine. Why are constantly butting your nose into..”

Most of us have heard this conversation countless times in Shuls across the country. The conversation deals with the Shabbos morning reading of the Torah and addresses the issue of whether it is necessary to correct the reader of the Torah or not.

The Shulchan Aruch (Orech Chaim 142:1) writes, “If he read and erred, we make him go back.” The Ramah adds the qualification that it is only if it changes the meaning of the matter. If there is no change in meaning, however, we do not make the correction.

What is an example of changing the meaning? If the error was changing Yaaseh to Ye=awe-she, or vice versa, we do correct it.

What about if the error was in the Trop – the cantillation marks? Believe it or not, quite often the cantillation marks do convey meaning and when one word is connected to the next word and the reader stops improperly disconnecting the words – the error must be corrected according to the Mishna Brurah (142:4) who cites the Sefer Atzei Shittim. The Kaf HaChaim concurs with this ruling (142:8).

What is not generally known is that the issue of correcting may be vastly different when the reading of the Torah is during a weekday or on a Shabbos Mincha. In such cases, the author of the Mishna Brurah in his Biur Halacha (142 “Machzirin Oso”) seems to indicate that we do not correct him, even if the error actually changes the meaning. He does add the qualification that this is only if the reader had read ten verses from the Torah otherwise.

The careful reader will have noted that we used the term “seems to indicate.” Well does he or doesn’t he? This is a good question. In the beginning of the piece, the Chofetz Chaim clearly writes that the correction is not made. Let us note that the rationale for leniency is predicated upon the idea that these “extra” verses did not actually have to be read, since one fulfills the obligation by reading ten verses. Therefore, if one erred in reading them it makes sense to say that there is no need to correct it. However, toward the end of the piece, the Chofetz Chaim is unsure as to whether a mistaken reading of the verse may be worse than no reading of the verse. All this leaves us with a question as to what we should do if the reader makes an error during the weekday.

It would seem that we have to weigh both sides carefully. Correcting the reader can often be rather embarrassing to the reader, and it should not be done unless halacha expressly requires it of us. When Chazal tell us that embarrassing a human being is likened to killing him, a very very deep message is conveyed by their words.

All this is reminiscent of a fascinating debate between my Rosh Yeshiva, Rav Henoch Leibowitz zatzal and Rav Chaim Shmulevitz zatzal in regard to Pnina. The Gemorah in bava Basra 16a states that Pnina acted for the sake of Heaven when she made Chana cry on her lack of children. How so? Pnina was well aware of Chana’s lofty spiritual status and knew quite well that the reason Hashem was holding back from granting her children was because she was not as close as she could be to Hashem. Hashem wanted her prayers and that she should come ever closer to Hashem. Pnina saw this – Chana did not. Pnina took it upon herself to assist Chana in coming closer to Hashem.

Rav Chaim Shmulevitz writes that we see here the power of Midah k’neged Midah – how the idea of measure for measure works. It is like a law of nature, no matter how innocent Shimon is, if Reuvain was pained on account of Shimon, Shimon will get punished.

Rav Henoch Leibowitz disagreed. He reasoned that Hashem would not punish a completely innocent person. There must have been a tiny infinitesimal degree of antipathy on the part of Pnina toward Chana. It would be undetectable by today’s standards or by the standards which anyone else would be judged, but nonetheless it was there. It was this subtle negative thought which brought such consequences upon the Tzadaikes that Pnina was.

Getting back to our issue of correcting the reader, we should be able to learn from the views of both of these great Gedolim. From Rav Henoch Leibowitz we should learn to try to completely purify the intent behind oreading_torahur action. Why are we correcting the reader? Should we really be doing so? If so, shouldn’t we leave it to the appointed Gabbai?

From the words of Rav Chaim Shmulevitz we should be thinking, “It may not be such a good idea for the reader to receive pain and embarrassment because of me, even if the halacha does warrant it. Let someone else do it.”

If it is a Shabbos morning and it is a Bar Mitzvah bochur who is reading, the shul should make every effort that on the Gabbaiim in the front standing next to the Bar Mitzvah bochur should be correcting. Young men are usually quite embarrassed when they are the recipients of corrections.

So what should we do during the weekday? The issue, of course, should be presented to the Rav of each respective Minyan. However, here are some suggested guidelines: If the reader is a person who will not be embarrassed, and he is not just saying this but really means it, then he should be corrected in order to fulfill the latter part of the Biur halacha. If there is any question whatsoever, however, then we should not do so. If there are not ten verses otherwise, then we should make the correction.