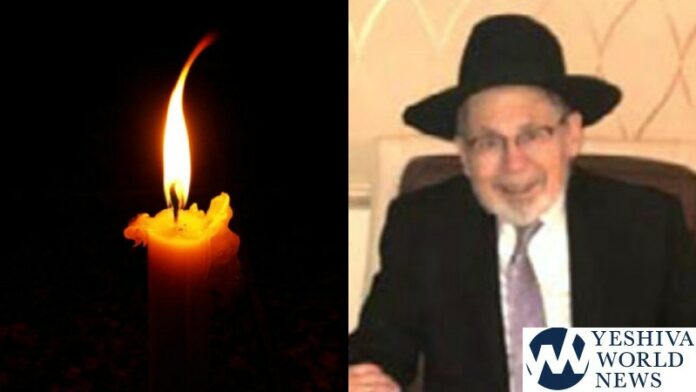 We are sad to announce the passing of Rabbi Moshe Neuman a”h today.  He was 91 years old.

Rabbi Neuman was a man who lived and breathed chinuch.  He was the dean of the Bais Yaakov of Queens.  Rabbi Neuman educated thousands of young ladies for a half century al derech Yisroel saba.

Rabbi Neuman dedication to Torah education had literally changed the terrain of Torah chinuch in Queens.  Indeed, for a number of families, Rabbi Neuman had educated four generations of students.  Rabbi Neuman was at the helm of Bais Yaakov of Queens from 1961 to 2011.

Rav Neuman was born in Germany, and arrived in America at a young age.  Initially, Rabbi Neuman wished to pursue a degree in tax law.  However, his remarkable successes and experiences as a substitute eighth grade teacher convinced his Rebbe, Rav Hutner zt”l,  to have a heart-to-heart talk with him and convinced him to pursue the noble field of Chinuch.

The Bais Yaakov of Queens began in a small building in the Corona section of Queens with 27 students.  He eventually built it into a four-story school with almost 850 students off Metropolitan Avenue in Queens.

Rabbi Neuman knew every child by name and greeted them daily as they descended from their buses every morning.  He greeted them by first and last name and wished them a warm boker-tov – each day.  Living across the street from the Bais Yaakov, this author witnessed his remarkable activity and dedication.

Parents trusted him with their children.  There were times that he himself rushed a young fourth grader to the hospital.  He would pull out splinters, or a loose tooth hear and there.  He instructed young teachers and lovingly advised them as to how to handle any given situation.

Most importantly, however, he cultivated a true Bais Yaakov atmosphere where thousands of students who walked through the Bais Yaakov developed a love of Torah, and a love of Mitzvos.

Rabbi Neuman’s graduates went on to attend the very best high schools in the New York area.  Every menaheles whether in Brooklyn or other schools elsewhere vied for the Queens girls – they were known to be the very best.

Rabbi Neuman’s legacy is three-fold – the remarkable institution that Bais Yaakov of Queens is, the many thousands of his graduates that lead remarkable Torah lives, and a remarkable family.  He has a son who is following in his footsteps, two other sons and two daughters and numerous grandchildren and great grandchildren leading beautiful Torah true lives. His partner in life for over six decades, Mrs Rivka Neuman, the creator of the famed 613 Torah Ave series, was a mechaneches par excellence in her own right.

May Rabbi Moshe Neuman a”h be a meilitz yosher for us all.