Israel has been excoriated since the death of Al Jazeera journalist Shireen Abu Akleh,  despite the fact that it is likely she was killed by Palestinian terrorists. Additionally, even if she was accidentally killed by IDF fire, Israel has a right to carry out counterterrorism operations against terrorists actively planning to murder Israelis. Journalists who enter war zones do so at their own risk.

But beyond the above facts, Israel advocacy expert Tamir Wertzberger noted the ridiculous double standards Israel is held up to. “From 1990 to 2020, 2,658 journalists were killed in war zones, with Iraq, Mexico, the Philippines, Pakistan and India topping the list,” Wertzberger wrote. “Twelve of them were Al Jazeera journalists, seven of whom were killed in Syria, two in Iraq, one in Yemen, one in Libya, and one, of course, in Jenin this week.
235 journalists have been jailed, with Turkey topping the list with 67 prisoners, Egypt-21, China-20, Eritrea-16, Saudi Arabia-14 and Belarus-11.”

“There were no special discussions or decisions by the UN Security Council for any of the above, or such a huge media reaction. Call it what you will. I call it anti-Semitism!”

In the video below, a spokesperson for the Israel Advocacy Movement says: “The death of Shireen Abu Akleh exposes the media’s hatred of Israel. Brent Renaud was a Time journalist killed in Ukraine this year. When you type “Brent Renaud” and “Time” into Google, there are only 277,000 results. Pierre was a Fox journalist also killed in Ukraine, he has 190,000 results. Oleksandra was also from Fox and killed at the same time, she just has 30,000. Danish was from Reuters and killed in Afghanistan, he has 407,000 results.”

“Over the last two decades, 487 journalists [2,658 were killed in the past 30 years, according to the International Federation of Journalists] have tragically been killed in war zones. None of them received this level of coverage. This frenzy is being driven by the media’s uncontrollable desire to demonize Israel. And as Israel couldn’t be blamed for the other killings, their deaths barely registered.” 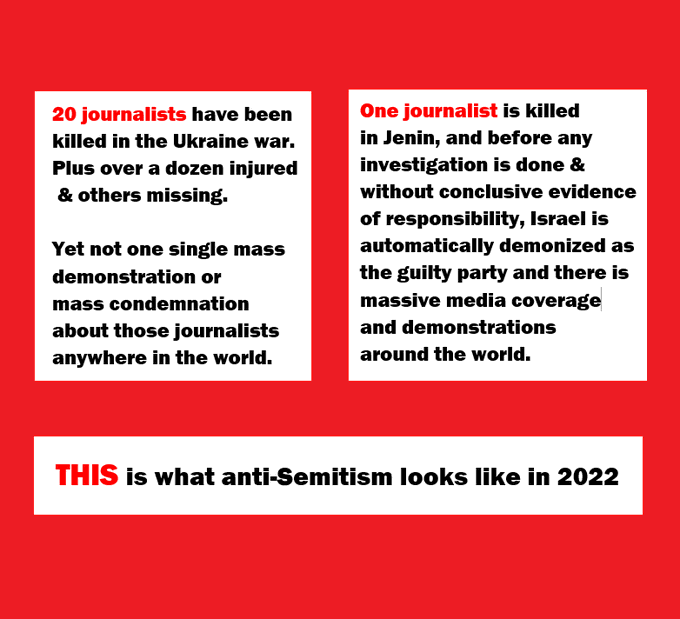