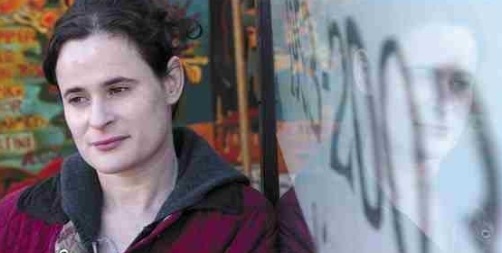 One of the authors of the despicable story against slain Menachem Stark received two awards for her excellence in Jewish journalism, based on two anti-Hasidic stories she wrote for The Jewish Week, an inquiry by YWN found.

Hella Winston, one of the reporters assigned by the NY Post for Sunday’s front cover story, is best known for her writings for The Jewish Week on haredi child abuse and against the Borough Park Shomrim.

Winston’s name was meanwhile removed for the NY Post’s story bi-line and replaced with “Hella Winson” as additional reporting. 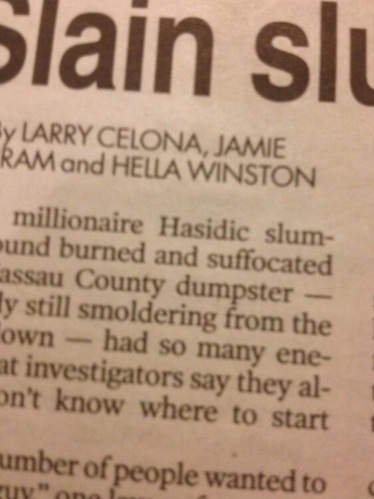 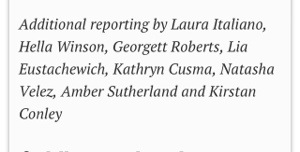 According to the Jewish Week, Hella Winston, who has been reporting about the problem of child abuse in the fervently Orthodox community for The Jewish Week for four years, received an Honorable Mention in the 2012 Casey Medals for Meritorious Journalism.

Ms. Winston received two awards for excellence in Jewish journalism from the American Jewish Press Association’s in 2012. In the Excellence in News Reporting Category, Hella Winston took first place for “In Lakewood Abuse Cases, A Parallel System Of Justice” and second for “Tragedy in Borough Park Puts Shomrim Under Scrutiny.”

She is also the author of the book “Unchosen: The Hidden Lives of Hasidic Rebels” published in 2006, writing about Brooklyn’s Hasidim unhappy with their “highly restrictive way of life and sometimes desperately struggling to escape it.”

Read the review of her book here

The revaluations above are enough to determine the notice behind the deployment of adding her name to the hit piece against a community in grievance, burying one of its finest, killed in a heinous act of murder.

Ms. Winston is also the author of an article in The Jewish Week hitting Assemblyman Dov Hikind, in 2008, for not disclosing information of abuse that were obtained by the Brooklyn Assemblyman. Which explains why Mr. Hikind would not seek a direct confrontation with the Post, not showing up at the press conference Sunday afternoon arranged by Brooklyn Borough President Eric Adams, and attended by all local elected officials, including 100s of community leaders and operatives.

The nature of Winston’s reporting also leads to the fact that the Post decided to report about the Brooklyn press conference condemning the NY Post and calling for its boycott. In the report, the only politician that is quoted, is Borough Park council member David Greenfield. The fact that there were 15 speakers at the rally, 3 of them in most senior positions, didn’t hold them back of portraying the event as an insulated event by The Hasidic community, led by the representative of the largest gathering of Orthodox Jews in the city of New York.

Now, go wonder why the NY Post chose the Sunday front cover to defame the name of an innocent victim, his family and entire community.

In an email correspondence with YWN, Hella Winston said she didn’t write a word of the Post story. She claims to have only contributed “additional reporting,” which amounted to literally one piece of information.