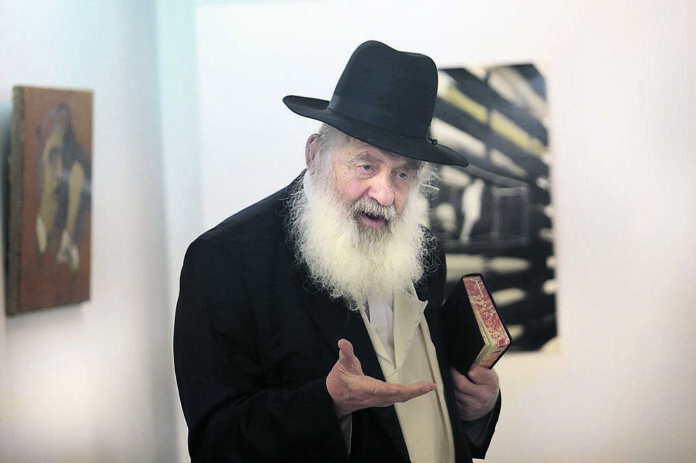 Imagine a top actor, a top film director, and a top comedian all in one.  Imagine a Tom Cruise, a Steven Spielberg, and a Jimmy Kimmel – all wrapped into one.  Then imagine that one person, leaving it all – the fame and the fortune, and becoming a baal teshuvah.

And not just any baal teshuvah, but one who simultaneously immersed himself in both the sea of the Talmud and the vast ocean of Kiruv rechokim – bringing tens of thousands of people tachas kanfei hashechina.  Imagine him becoming a Rabbinic leader in Klal Yisroel.

Fast forward to 2022.  The menaheles of a Bais Yaakov seminary, located in the very same building that once housed Rav Shmuel Auerbach zatzal’s Yeshiva, gives Rabbi Uri Zohar a call.  She wants him to speak to the seminary girls.

Rabbi Uri Zohar responds, “What type of girls do you have in the seminary?”

“I understand.  Such girls, however, would respond well to any Rav or inspiring speaker.  If it would be girls who could be inspired by my own life experience to come under kanfei hashechina then I would do it.  But in this case, the Bais Yaakov girls are already living a Torah life.  And I very much want to stay with my precious Gemorah study.”

Let’s not forget, however, that he also headed the remarkable Kiruv organization – Lev L’Achim.  And yet, he valued his Torah learning – so much.

HOW DID IT HAPPEN?

But how did he get to this remarkable place?  What were the seeds that planted this incredible transformation?  What was his spiritual history?

Uri had always believed that the world was created by a Creator.  But, at first, he did not believe in Shavuos – that the Torah was given at Har Sinai 3334 years ago.   He was educated at the Hebrew University. He had studied philosophy. Shavuos, in his eyes, was a myth.

And like the Rabbi Akiva of yore, he sported a disaffection, a slight animadversion toward observant Jews.  They were primitive – relics from an embarrassing epoch in European Jewish history.  They were reminiscent of ghettos of Europe past.

It was at a party.  He met someone who was firm in his Emunah that Matan Torah was a fact.  He explored.  And then at age forty, once again, like Rabbi Akiva of yore, he began studying the claims of observant Jews to the imitable truths of Torah.

And then, he stepped forward to claim his birthright – the birthright of Sinai.  He hosted a game show.  And soon that popular game show host started wearing a Yarmulkah. He discovered, in his own words, that, “there is purpose to our existence.  There is reward for our actions.”

He devoted himself to studying Torah.  He moved to Yerushalayim. But under whom and under what system did he study?

We go back to the month of April, slightly over 302 years ago – in the town of Vilna.  The Vilna Gaon, was born.  His influence on Judaism today is readily apparent.  His main student, Rav Chaim Volozhin, founded the Yeshiva movement that has vouchsafed Torah Judaism.  In his Nefesh haChaim, his student writes that we are here to help others – plain and simple.  And then over 500 of the Vilna Gaon’s followers in the four crucial years between 1808 and 1812 travelled to Eretz Yisroel. Soon they moved to Yerushalayim and the Ashkenazic community in Eretz Yisroel became alive once again.

We fast forward to Berlin, 1934.  We witness the rise of Hitler yemach shmo v’zichro and a Rabbi, Rav Moshe Avrohom Zilberman moves to England.  Unfortunately he passed away leaving his son, an eleven year old orphan of both parents – Yitzchok Shlomo Zilberman on his own.  He takes the last boat out of England to Eretz Yisroel.  The orphan, a remarkable Ilui and prodigy, is taken in by the legendary founder of Yeshiva Kol Torah, Rav Yechiel Michel Schlesinger.  Rav Yitzchok Shlomo is directed to the Mir Yeshiva, and studies under the tutelage of Rav Laizer Yudel Finkel, son of the Alter of Slabodka.

The chain of Mesorah, of the Alter, goes back to Rav Simcha Zissel Ziv of Kelm, who studied under Rav Yisroel Salanter, founder of the Mussar Movement. Reb Yisroel Salanter was inspired by Rav Zundel of Salant, a student of Rav Chaim Volozhin, whose Rebbe, of course, was the Vilna Gaon.

Rav Yitzchok Shlomo Zilberman, adopts the study method of the Vilna Gaon, and creates a revolution in Yerushalayim.  And Rav Zilberman inspires and studies with Uri Zohar.  Of course, we say harbeh shluchim lamakom, but from a prima facie point of view:

And no Rabbi Uri Zohar – no thousands upon thousands of remarkable baalei teshuvah.  He visited in America and spoke in Bais Yaakovs.  This author remembers his remarkable impact and was honored to translate and interact with him.  He was also a remarkable Talmid Chochom.

We stand in remarkable awe and admiration of not only one of the most extraordinary Baalei Teshuvah of the generation, but someone who represents the loftiest Mesorahs of Klal Yisroel. Yehe zichro Boruch!