The letter was given to him by HaRav Elyashiv’s great-grandson, Rav Shaul Miller, the principal of Netzach Yisrael.

A visibly moved Herzog read the letter with great interest and thanked Rav Miller for the wonderful gesture. He also spoke about the special connection his grandfather had with HaRav Elyahsiv, a relationship that began when HaRav Elyashiv studied at the kollel founded by HaRav Herzog and later in his appointment as Dayan of the Beis Din HaGadol. 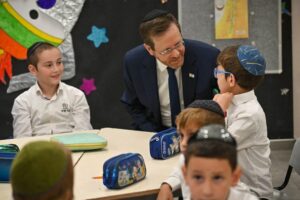