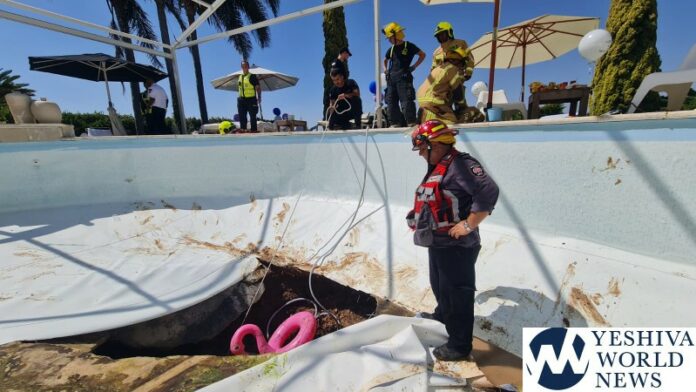 The couple who owned the pool which developed a sinkhole during a pool party on Thursday, leading to a man’s death, was arrested following the incident for suspected negligent manslaughter.

The victim, who was later identified as Klil Kimhi, z’l, 32, of Tel Aviv was sucked into the sinkhole and his body was found hours later after a complex rescue operation.

The couple who owned the villa on the Karmei Yosef yishuv, near Rechovot, never applied for a permit to build the pool. According to Israeli media reports, a permit would not have been granted as there are infrastructural problems in the area due to underground tunnels. Additionally, the couple regularly rented out their home and pool without a business license.

They were released to house arrest on Friday morning but were banned from returning to their home on the moshav due to suspicions that they would disrupt legal proceedings.  Instead, they are staying at their daughter’s home in Petach Tikvah until at least Monday at noon.