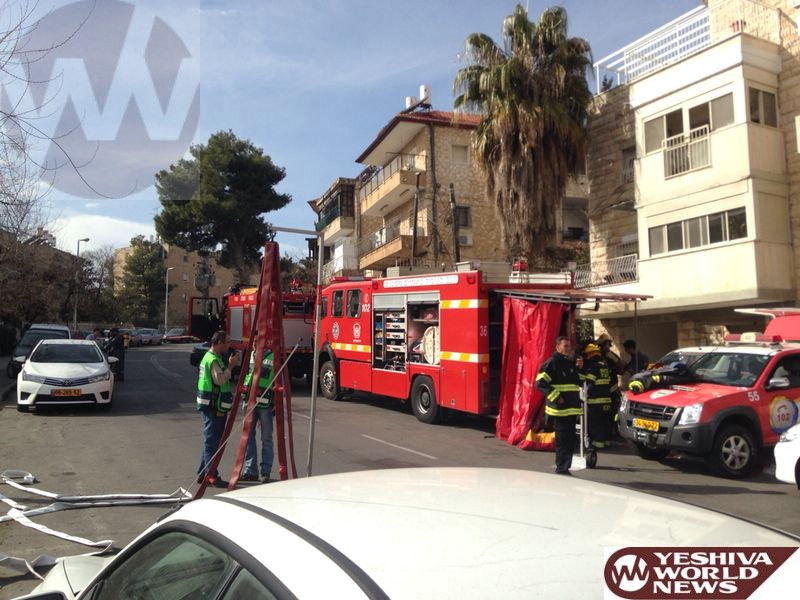 The tragedy that occurred in the Givat Mordechai neighborhood of Yerushalayim on Wednesday, 21 Shevat 5774 has the country horrified. The frum family became ill, apparently the result of having an exterminator work in their apartment a day earlier. As a result, two children died in Shaare Zedek Hospital, sisters, one 18-months-old and the second 4-years-old. Two other children remain in a pediatric intensive care unit in serious/unstable condition.

It appears there was significant residue from the pesticide used, which was phosphorus base. At least one of the children complained of not feeling well on Tuesday night after the family returned. Being good parents they took the child to an emergency clinic and were sent home with Acamol, the Israeli equivalent of Tylenol.

When the family awakened on Wednesday morning no one felt well and at least one of the children vomited. Mom and dad remained home with the children and later in the morning a call was made to 911 after it was clear the situation was far more serious than first realized. After Ichud Hatzalah, Magen David Adom, police, fire and Environmental Ministry hazmat technicians responded to the home on Wednesday morning, it became painfully clear that a tragedy had occurred.

The 18-month-old died in the hospital not too long after arriving. Deputy Medical Director Dr. Ovadia Shemesh explained the all life-saving resuscitative measures were taken and the best medicine has to offer was being given to the children but there was no antidote to counteract the phosphorus and all that could be done is to support vital body functions. Dr. Shemesh stated the 4-year-old was in critical/unstable condition, and she died a few hours later in a pediatric intensive care unit. The chemical agent slowly attacked their lungs and other vital body organs.

The two remaining children, approximately 4 and 7 remain in serious/unstable condition in the intensive care unit. The parents, a frum couple in their 30s are listed in light medical condition but psychologically they are having a most difficult time as they continue davening.

The principal of the talmid torah where two of the children learn explained the parents spent hours in an emergency clinic at night and were sent home with the Acamol. “No one imagined that they were poisoned when they were throwing up and they were told to take something against vomiting” he explained.

The exterminator was taken into police custody as investigators are working to determine if the deaths were the result of negligence on his part. Experts explain that the pesticide in question is used in the industry and it is not illegal. Some explain it is possible that the solution was not sufficiently diluted and the residue on the floor of one of the rooms resulted in the lethal dose over the period of the entire night and early morning hours. Others posit the family may not have received proper instructions and returned too soon. Hazmat technicians measuring levels in the home later confirmed a dangerously high level of a toxic substance on the floor of one of the rooms. The fire department evacuated the entire building and closed Shachal Street as well as evacuating the nearby Noam School.

However, Professor Yonah Amitai, a specialist in pediatric toxicology at Bar Ilan University has a different view. While police explain the pesticide is legal, the professor explains the material used by the exterminator is not acceptable for home use. The phenomenon caused by inhaling the chemical he explains is as follows. The “Phosphine” attacks the intra- cellular oxygen utilization process and this leads to hitting organs that rely on oxygenation for survival, especially one’s brain, heart and lungs. The professor explained the expected symptoms of inhalation of this substance would include delirium and difficulty breathing, which can lead to death, which was the case here unfortunately.

Moriah Police Commander Chaim Blumfeld told the media the exterminator worked in the apartment two days ago, not the previous day. Blumfeld confirms establishing the pesticide used is indeed legal but not generally used for standard extermination jobs. The exterminator was not injured.

Fire Commander Eli Basson explained that when his firefighters arrived the door was locked. They were let in by a neighbor with a key. When they opened the door “there was an odor of a chemical substance,” he explained, stating the investigating continues.

Ichud Hatzalah adds that some of the responders were not feeling well after the call and they were sent to the hospital to be checked out as well.

AS WE PUBLISH THIS ARTICLE:

The condition of the two brothers, 3 and 6-years-old remains serious and it appears preparations are underway to transport them from Shaare Zedek to Schneider Children’s Hospital in Petach Tikvah.