A message sent in 1949 to Viktor Abakumov, then the Minister of State Security in the Soviet Union, reported on the establishment of an “anti-Soviet center” in New York by the Frierdiker Rebbe, HaRav Yosef Yitzchak Schneersohn, z’tl, Chareidim10 reported.

The message, sent by KGB agents operating in New York, stated: “The American espionage system established an anti-Soviet center in New York under the cover of a Rabbinic training school, and it is headed by the Jewish tzaddik Schneersohn, who was deported from the USSR in 1928.”

The Frierdiker Rebbe was sentenced to death by the Soviet regime in 1927 for the “counter-revolutionary activities” of spreading Torah and Yiddishkeit.

International outrage and pressure led the regime to commute the death sentence and instead banish the Rebbe from his home in Leningrad to exile in the city of Kostroma for three years. This sentence was also commuted due to political pressure and the Rebbe left Russia in 1928. 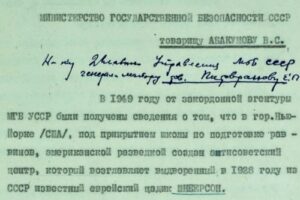