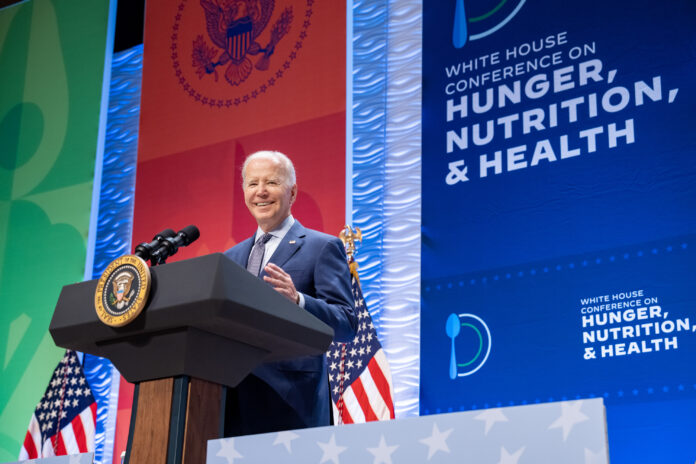 President Joe Biden raised a whole bunch of eyebrows Wednesday when he started calling out and looking for a Congresswoman who is no longer alive during a White House event.

Speaking at the White House Conference on Hunger, Nutrition, and Health, Biden gave a shoutout to the late Republican Rep. Jackie Walorski, who along with two staffers died in a tragic traffic accident in August.

“I want to thank all of you here, including bipartisan elected officials like… Senator Braun, Senator Booker, Representative… Jackie, Jackie are you here?” Biden said. “I think she was going to be here to help make this a reality.”

Walorski, in fact, was not going to be there, because she’s no longer alive.

White House Press Secretary Karine Jean-Pierre insisted to reporters that the president totally, absolutely knew that Walorski was dead, and that he simply had her “top of mind” when he made the comment.

Jean-Pierre said more than a dozen times that Biden wasn’t confused about the deceased status of the congresswoman.

“The president was naming the congressional champions on this issue and was acknowledging her incredible work,” Jean-Pierre said. “He had already planned to welcome the congresswoman’s family to the White House. On Friday, there will be a bill signing in her honor this coming Friday. So, of course, she was on his mind. She was top of mind for the president.”

But, a reporter asked, if Walorski was indeed on President Biden’s mind, why was he looking for her in the room?

“Again, I think people can understand. I think the American people out there who, you know, watch the briefing from time to time maybe at this moment will understand when someone is that top of mind,” Jean-Pierre responded.

Another reporter said it was “confusing” that Biden thought Walorski was “alive and in the room.”

“I don’t find that confusing,” Jean-Pierre asserted. “I mean, I think many people can speak to, sometimes, when you have someone top of mind, they are at top of mind. Exactly that. And it is also, if you put it into context, it’s not like it happened without outside of context.”

The reporter fired back that he has “John Lennon on top of mind just about every day. But I’m not looking around for him.”

“When you sign a bill for John Lennon as president, then we can have this conversation,” the press secretary concluded.