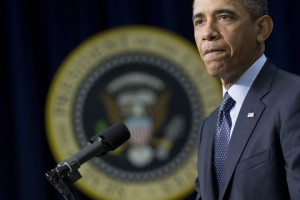 The White House says President Barack Obama’s upcoming budget proposal will not include his past offer to accept lowered cost-of-living increases in Social Security and other benefit programs. Those had been a central component of his long-term debt-reduction strategy.

Officials said Thursday that those potential reductions in spending, included in last year’s Obama budget, had been designed to initiate negotiations with Republicans over how to reduce future deficits and the nation’s debt. But Republicans never accepted Obama’s calls for higher tax revenue to go along with the cuts.

One official said the offer would remain on the table in the event of new budget talks but that it would not be part of the president’s formal spending blueprint for fiscal 2015.

The official was not authorized to comment by name on the budget plan before its March 4 release and spoke only on condition of anonymity.

The decision to drop the cost-of-living proposal was essentially an acknowledgement that Obama has been unable to conclude a “grand budget bargain” with Republican leaders, even by including in his previous budget plan a benefit reduction opposed by many Democrats.

While Democrats will cheer the new decision, Republicans are sure to portray the White House move as abandoning any commitment to fiscal discipline.

The new Obama proposal would eliminate congressionally mandated automatic spending cuts that are scheduled to continue kicking in through 2015 by adding $56 billion to the budget, evenly divided between military and domestic spending. That increase would include money for what the White House calls an “Opportunity, Growth, and Security Initiative.”

That additional spending would be paid for with a mix of other spending cuts and the closing of some tax loopholes, officials said. They did not describe the specific cuts or tax changes.

The officials said the White House will retain other spending reductions in benefit programs that it has proposed in the past, including a requirement that wealthier Medicare recipients pay more.

The Obama budget would build on the recently passed bipartisan congressional agreement that signaled an end to the brinkmanship that defined recent fiscal confrontations.

The proposed cost-of-living trims, now put aside by Obama, had faced significant opposition from Democrats. Just last Friday, 16 Senate liberals called for Obama not to include in his budget any provision that would reduce increases in Social Security benefits to future retirees.

Even though the Obama proposal does not include that significant debt-reduction idea, the White House says that passage of a separate overhaul of immigration law, combined with more slowly growing health care costs, would eventually result in a national debt that is lower as a share of the total economy than projected in past administration budgets. It says deficits as a share of the economy will be below 2 percent after 2025.

The administration’s budget is expected to be more bullish about the fiscal picture than a recent forecast by the non-partisan Congressional Budget Office. Economists at CBO projected earlier this month that deficits would fall to 2.6 percent of the economy in 2015 and then rise to about 4 percent between 2022 and 2024.