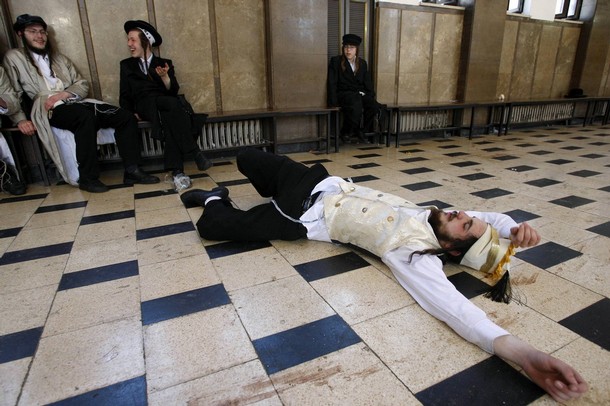 It is one halacha that parents just don’t like at all.

It is also one that they do not really have an answer for.

“But Mom, Dad, you are always telling me to keep halacha, and this is a Shulchan Aruch! The Shulchan Aruch states quite clearly (OC 695:2), ‘A person is obligated to get drunk on Purim to the point where he cannot distinguish between Boruch Mordechai and Arur Haman.’  It’s halacha, Mom!”

“Oh yeah, well it’s also a halacha to honor your mother and father!  And you are not drinking! Period.”

“I don’t care about everyone else.  If you drink – no car privileges!  End of story.”

There will generally be two types of readers of this article.  Those that are appalled at the excess drinking, the car accidents, the ER visits, the stench of vomit and the genuine desecration of G-d’s Name when all this debauchery is witnessed by civil servants and goyim alike.

There will also be those who will think, “Calm down.  People need a bit of a break and there is nothing wrong with getting drunk a little bit.  It is only once or twice a year, anyhow.”

There will also be a third type who will be perhaps a bit more inquisitive and observe that this particular ruling of Chazal is generally not like other rulings.  They will question what exactly happened here.  I would like to present a possible theory.

The aforementioned Shulchan Aruch derives the halacha from a statement of Rava in Megillah 7b.  There are variant texts of this Gemorah – the examination and explanation of which are for another time.  Let us direct our attention to another Gemorah.

THE YERUSHALMI AND THREE INTERPRETATIONS

There are three possible understandings of this passage of the Yerushalmi.  The first is that indeed, this is the case, but the halacha is not in accordance with Rabbi Yehudah Bar Illai.  The second possibility is that we are misreading the import and implication of this Yerushalmi.  The third possibility is that Rabbi Yehudah Bar Illai had a perfectly valid reason not to consume wine on Purim and was in complete accordance with our statement in the Gemorah which is cited by the Shulchan Aruch.

The Shaarei Teshuva (695:2) writes clearly that we should interpret the Yerushalmi in this third method.    This third understanding of the Yerushalmi understands that  Rabbi Yehuda Ben Illai had a weaker constitution and that drinking wine would actually damage his health, body or general welfare.

A very good argument can be made that in contemporary times we all share the status of Rabbi Yehudah Bar Illai.

According to the National Institute of Health [See http://www.niaaa.nih.gov/alcohol-health/alcohols-effects-body ], drinking too much –  even on a single occasion, can take a serious toll on your health.  Here’s how alcohol can affect your body:

Brain:
Alcohol interferes with the brain’s communication pathways, and can affect the way the brain looks and works.   This is even on a single occasion.

Heart:
Drinking a lot, even on a single occasion, can damage the heart, causing problems including:

Liver:
Heavy drinking, over time, can lead to a variety of problems and liver inflammations including:

Pancreas:
Alcohol causes the pancreas to produce toxic substances that can eventually lead to pancreatitis, a dangerous inflammation and swelling of the blood vessels in the pancreas that prevents proper digestion.

Cancer:
Drinking too much alcohol can, over time, increase the risk of developing certain cancers, including cancers of the:

Immune System:
Drinking too much can weaken the immune system, making it a much easier target for disease.  Drinking a lot on a single occasion slows your body’s ability to ward off infections – even up to 24 hours after getting drunk.

According to “Alcohol Use and Abuse,” a Harvard Health Publication, the use of alcohol nowadays is fraught with danger, and is often quite damaging to the body.  Among the effects are:

OTHERS CERTAINLY ARE IN THE RAV YEHUDAH BAR ILLAI STATUS

Let us not make the tragic error that we are above any of these problems.  They exist in our communities and often under our very noses.  Even if it was not true that alcohol consumption constitutes a “Rabbi Yehudah Bar Illai risk” to a particular individual, the very fact that new and more dangerous technologies have developed in the past century that can greatly increase dangers to other around us, the status of Rabbi Yehudah Ben Illai would apply to others around us.   Automobiles did not exist in previous times and cars plus alcohol endanger the welfare of others.  In our communities, not one year has gone by in recent years where alcohol consumption did not cause a major tragedy or accident.

As far as the Mitzvah itself is concerned, the opinion of the Ravya (564) and the Mordechai (Megillah Chapter 2) and the response of the Maharil (#56) is that even back in the time of Chazal it was not obligatory, rather it is a “Mitzvah b’almah” – an ideal that is no way obligatory.   The Ramah cites these views as halacha.

Some will invariably make the argument that drinking large amounts of alcohol was always the practice. How can we now, all of a sudden, assume that it is a health risk and declare that we all share the status of Rabbi Yehudah Bar Illai?

The answer to this question rests within an answer to yet another question.  According to the National Vital Statistic Reports of 2004 (52 #14), the life span of Americans has nearly doubled since 1900. What modern innovation contributed the most to the increase in human longevity?   The answer is most likely, the refrigerator and the decline in the use of salt as a preservative.  Salt kills.  We have lowered our consumption of it and now we live longer.  The same is true with alcohol.

It is my contention that the Shaarei Teshuvah’s understanding of the Yerushalmi  is the one that is halachically most cogent (as it does not posit a contradiction of sources).  It is also my view that all of us fall within the rubric of the exemption of Rabbi Yehudah Bar Illai, and should not drink to the point of anywhere near drunkenness – even according to the Poskim that do not agree with the Ramah’s reading.