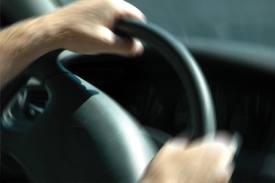 A driver facing criminal charges over a 24-minute lap around Manhattan told police he was a “car fanatic” who wanted to break unofficial records for circling the island, but he said that the viral video of the stunt was sped up, making it appear he was driving faster than he was, court documents released Tuesday show.

Adam Tang, 32, pleaded not guilty Tuesday to a misdemeanor charge of reckless endangerment, rebuffing a plea offer that would entail two months in jail — and tried unsuccessfully to get his driver’s license back.

Tang said he sped up the “kind of boring” original footage of the roughly 24-minute trip to fit it to music, according to a police account of his statements after his Sept. 5 arrest. Touting himself as a well-trained driver, he insisted he drove conscientiously in the late-August joyride.

“I believe that I did the run safely. I drove at a high rate of speed, but I was not driving recklessly,” Tang said, according to the documents. “I am a car fanatic … I put a lot of esteem into driving.”

Tang claimed he never went over 100 mph and ran only one red light at a pedestrian crosswalk, according to the criminal complaint.

A Canadian-born day trader, Tang was arrested after a dashboard-camera video showed a BMW Z4 sports car making a 26.4-mile loop around Manhattan in 24 minutes and 7 seconds. The six-minute clip drew hundreds of thousands of online views.

The video shows the car zooming within a few feet of others’ bumpers, going through a red light and making other risky maneuvers, a criminal court complaint notes.

Tang acknowledged seeing other drivers hit their brakes when they saw him coming, but he said he stopped for several red lights and never cut off any other motorists, according to the account of his statements.

“I drive fast all the time,” Tang told authorities, adding that he started driving at age 12 and took a variety of driving courses. He said he’d done the Manhattan loop before at the same speed, just without a camera.

Tang’s license has been suspended since his arrest. Gomez sought Tuesday to get it reinstated, but Manhattan state Supreme Court Justice Jill Konviser declined.

“The conduct, if true — it’s extremely dangerous,” she said.