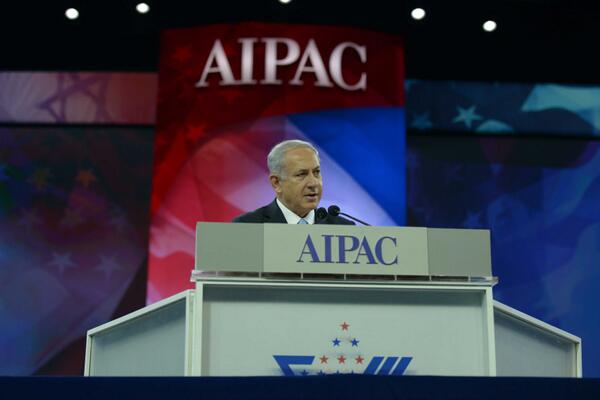 “The BDS boycott movement is not going to stop that, any more than the Arab movement could stop Israel from becoming a global technological power,” Netanyahu told the American Israel Public Affairs Committee (AIPAC) policy conference. “They are going to fail.”

The Prime minister explained that the BDS movement is just “bad for peace” because it hardens the Palestinian position and “makes mutual compromise less likely.”

The “BDS movement is not about legitimate criticism. It’s about making Israel illegitimate. It presents a distorted and twisted picture of Israel to the naive and to the ignorant. BDS is nothing but a farce,” Netanyahu continued. Pointing to Israel’s vibrant democratic society, its liberal values and freedom of religion, the Prime minister asked, “How could anyone fall for the BS in BDS? How can they fall for this?”

“Those who wear the BDS label should be treated exactly as we treat any anti-Semite or bigot. They should be exposed and condemned. The boycotters should be boycotted,” Netanyahu roared to thunderous applause.

“Everyone should know what the letters B-D-S really stand for: bigotry, dishonesty and shame,” he added.

Addressing the current P5+1 negotiations with Iran over its nuclear program, Netanyahu said Iran must be prevented not just from having a nuclear weapon, but also from having the capacity to make one. “If we allow this outlaw terrorist state to enrich uranium, how can we seriously demand that any other country not enrich uranium?” he asked. “Letting Iran enrich uranium would open up the floodgates. It really would open up a Pandora’s Box of nuclear proliferation in the Middle East and around the world. That must not happen.”

Netanyahu emphasized that only more pressure on Iran will get them to abandon their nuclear weapons program. “The greater the pressure on Iran, and the more credible the threat of force on Iran, the smaller the chance that force will ever have to be used,” he said.

Netanyahu also addressed for the first time what fruit a future peace settlement with the Palestinians could bear for Israel Peace. It would open up the possibility of establishing formal ties between Israel and many Arab countries, and the combination of Israeli innovation and gulf entrepreneurship “can catapult the entire region forward,” Netanyahu said.

“We all have so much to gain from peace,” Netanyahu sought to rally the pro-Israel crowd in readying for painful concessions.

While he didn’t mention President Obama by name, the Prime minister did praise Secretary of State John Kerry for his diplomatic efforts to solve the Israel-Palestinian conflict. “I want to thank the indomitable John Kerry,” he said. “You know, New York – — and Tel-Aviv, they’re the cities that never sleep. John Kerry is definitely the secretary of state who never sleeps. And I’ve got the bags under my eyes to prove it.”

The Prime Minister called on the Palestinian leadership to “stop denying history” and for President Mahmoud Abbas to once and for all “recognize the Jewish state.”

“In doing so, you would be telling your people, the Palestinians, that while we might have a territorial dispute, the right of the Jewish people to a state of their own is beyond dispute,” he said.

“So recognize the Jewish state. No excuses, no delays, it’s time,” Netanyahu pleaded.

Netanyahu also repudiated the idea raised by President Abbas of placing international peace-keepers in the West Bank to protect the borders. “It may take years; it may take decades for this formal acceptance of Israel to filter down through all layers of Palestinian society. So if this piece is to be more than a brief interlude between wars, Israel needs long-term security arrangements on the ground to protect the peace and to protect Israel if the peace unravels,” he said.

“We should always hope for the best, but in the Middle East we have to be prepared for the worst. And despite the best of hopes, international peacekeeping forces sent to Lebanon, Gaza, Sinai, the Golan Heights, they didn’t prevent those areas from becoming armed strongholds against Israel,’ Netanyahu asserted.

Netanyahu concluded his remarks by reciting, in Hebrew, a verse of the Torah: “I have put before you life and death, the blessing and the curse. Choose life so that you and your offspring may live.”