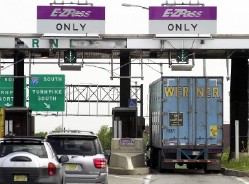 Motorists who repeatedly speed through New York state toll booths without paying would see their vehicle registrations suspended under legislation being considered by state lawmakers.

Under current law, toll evaders are contacted by a collection agency and can only face the loss of their registration if they commit multiple violations within the same locality.

Scofflaws run up more than $30 million in unpaid tolls and fines each year. State Sen. David Carlucci, the proposal’s sponsor, said residents in his commuter-heavy district just north of New York City are “extremely sensitive” when it comes to toll evaders.

“Hard-working people are paying more for the people who cheat the system,” said Carlucci, a Democrat. “It’s really something that gets my blood boiling.”

His proposal would allow officials to suspend the registration of anyone who racks up five toll violations within 18 months. The state would also be able to refuse new registrations to chronic evaders.

Gov. Andrew Cuomo supports the idea and had proposed it in his initial budget recommendation to lawmakers. It was left out of a nearly $140 billion budget deal worked out last month, however.

Lawmakers are set to return to the Statehouse April 28. Carlucci said he retooled his proposal to make it more agreeable and has dropped an earlier call for tougher criminal penalties for toll cheaters.

Two recent cases show the lengths that some drivers will go to avoid tolls. Port Authority police said Thursday that a New York truck driver mounted his license plate on a hinge and used a long string to raise it when he passed through a toll plaza.

Also Thursday, prosecutors accused a New York City taxi driver of not paying $28,000 in tolls by routinely tailgating vehicles as they went through E-Z Pass lanes at the Robert F. Kennedy Bridge.