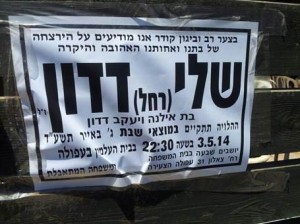 The lifeless body of terror victim Shelly Dadon HY”D was discovered in a Migdal HaEmek lot last week as was reported on erev Shabbos by YWN-ISRAEL. Sometime after the discovery police reported they believe the murder was an act of Arab terrorism. A gag order was announced, barring publication of details of the murder of the 20-year-old Afula resident.

Shelly headed to the area for a job interview. Family members became concerned at about 2:00 pm on Thursday, 2 Rosh Chodesh Iyar, and they contacted police. After giving a description they were instructed to come to the stationhouse, leading them to believe something had occurred. It is believed the murdered fled to a nearby Arab village.

A cousin report she was speaking with Shelly when suddenly something occurred and she began screaming and shouting she was being choked. The line then went dead.

About 400 meters from the location where the body was found, police four years ago discovered the body of taxi driver Yafim Weinstein HY”D, who was also murdered by Arab terrorists.

The levaya was held on Motzei Shabbos Parshas Emor at 10:30 PM in the Afula cemetery. The video was taken at the levaya of the victim HY”D. HaGaon HaRav Dovid Grossman begins speaking at about 1:40 into the video.