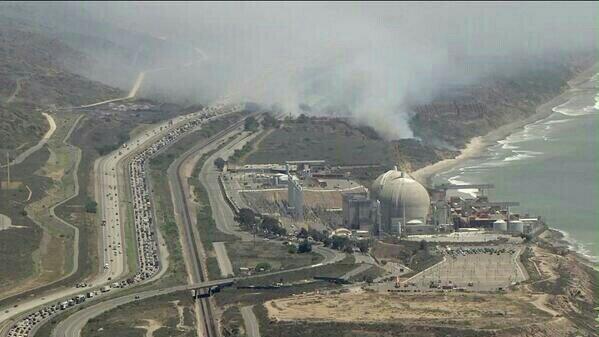 Homes in a Carlsbad neighborhood have caught fire as hundreds of people flee a fast-moving blaze dubbed the Poinsettia fire Wednesday.

Meanwhile, a second fire at Camp Pendleton was creeping closer to the San Onofre nuclear power plant. Southern California Edison said in a tweet that “about a dozen non-essential employees evacuated” from the plant because of the fire.

In Anaheim, the 91 Freeway was closed in Anaheim due to a small brush fire.

More than 11,500 evacuation notices have been issued for the fire as it moves through neighborhoods amid steep brushy canyons.

Television news footage showed two homes engulfed in flames as the fire whipped through the canyons, fueled in part by gusty winds. In addition to hundreds of homes and businesses, the fire had forced the evacuation of elementary schools and libraries.

Power outages as a result of the fire also prompted the Legoland theme to evacuate all of its rides, according to the park’s Facebook page.