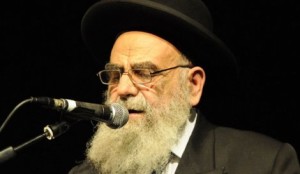 Rosh Yeshivat Porat Yosef Rav Moshe Tzadka Shlita announced that anyone seeing Pope Francis during his visit to Jerusalem must toivel in a mikve. The rav’s words are in line with statements made last week by Mekubal Rav Yaakov Adas, who told people to refrain from seeing or listening to the pope during his visit fro he is metamei.

The pope landed in Israel on Sunday 25 Iyar 5774 for a two-day visit to the PA (Palestinian Authority) and areas in Yerushalayim. Among those who met with him were the Chief Rabbis of Israel and members of the Chief Rabbinate Council.