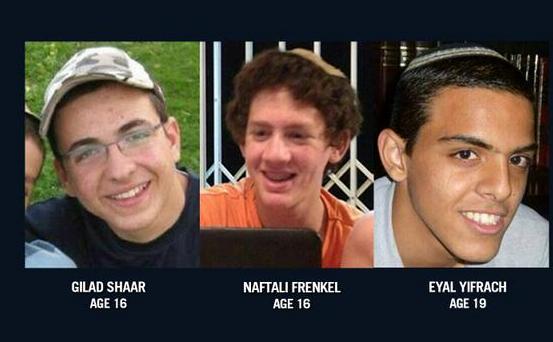 The hostages, 16-year-old Naftali Frenkel, 16-year-old Gilad Shaar and 19-year-old Eyal Yifrach were abducted as they entered a vehicle in the Gush Etzion area, believing they were getting a ride towards Beit Shemesh as they headed home for Shabbos. The ongoing operation has been named “Brothers Return” (שובו אחים).

Security forces during the last days have been involved in an almost unprecedented operation in the hope of tracking down the location of the hostages to bring them back home to their families. Senior security commanders describe the ongoing operation as “difficult and complicated” amid a realization that they are operating in difficult, hostile and densely populated urban setting that hosts a complex Hamas infrastructure. They have made dozens of arrests to date in the hope of extracting information from detainees that may lead to the whereabouts of the hostages.

On Thursday night at 18:30, Yifrach and Shaar got into a vehicle from Chativat HaNegev towards Gush Etzion as they wished to go home for Shabbos from yeshiva. They are talmidim in Yeshivat Makor Chaim located in Kibbutz Kfar Etzion. They were last seen on Thursday night at 22:00 at Alon Shvut Junction. All communications with them have been lost since.

AS the hours passed the parents became increasingly concerned and they phoned police. Police have since been accused of dropping the ball, taking hours until the information was passed to the IDF and ISA (Israel Security Agency – Shin Bet). Police officials are not willing to address the harsh allegations in the media at this time as search operations are underway.

There were signs pointing to a kidnapping. On Friday morning 15 Sivan at 11:00, the designation “Hannibal” was declared, meaning a kidnapping. From that moment the search began in areas of Yehuda and Shomron with a focus on the Hebron and S. Hebron Hills areas. Dozens of checkpoints were set up and vehicles were inspected in the hope of finding the youths. Senior commander continue to operate with the awareness that in the case of Gilad Shalit, the soldier was taken into Gaza and his freedom carried a heavy price tag for the State of Israel, the release of over 1,000 terrorists.

A vehicle, a Hyundai i35 was found near the abduction site. Before Shabbos it was reported that the vehicle was not connected to the terrorist kidnapping. The burned remains of the vehicle was taken to a police forensic lab for detailed inspection in the hope of recovering DNA or remains of a personal article of the youths that might shed a ray of light on the case. IDF officials took DNA samples of the youths from their families to permit forensic experts to proceed with their painstaking work.

Large numbers of troops were assigned to the house-to-house search in the effort to locate the youths. This includes IDF soldiers, ISA (Israel Security Agency – Shin Bet) agents, police, and Special Forces including the most elite of the IDF’s units. The IDF’s Liaison Office with the PA became involved too as pressure was applied on PA Chairman Mahmoud Abbas (Abu Mazen), seeking to show the PA leader that he must act to assist in bringing the youths home safely for if not, the result would not play out well for the PA in the international arena.

Many more soldiers were activated during the course of Shabbos and sent to the Hebron and S. Hebron Hills areas including paratroopers and other combat units. Defense Minister Moshe Ya’alon met with IDF Chief of Staff Lt.-Gen. Benny Gantz and his most senior advisors to get a clear picture of the situation and the ongoing search efforts.

Ya’alon and others continue operating on the premise that the three are still alive and most likely in the Hebron region. Ya’alon told the nation that in 2013, thirty terrorist abductions were thwarted and in 2014, fourteen abductions were prevented. “This one was under the radar” he added.

Prime Minister Binyamin Netanyahu was quick to seek political gain, placing the blame on the shoulders of Abu Mazen. These statements did not receive the backing of the international community as most believe Abu Mazen is not at all pleased over the situation, which works against him. In addition, the kidnapping occurred in an area “C” designation under the Oslo Agreement, which is total Israeli control, both civil and security. Hence, the responsibility falls squarely on the shoulders of the Government of Israel and its security agencies.

The Beersheva Resident Gave a Ride:

The first clue in the case came from Reuven Maimon, a resident of Beersheva. He posted a photo of the boys on his Facebook page accompanied with a call for tefilla. “I immediately identified two of the captives” he wrote. “I gave them a ride” he added. He took the boys on Thursday night at 18:30. He explains he took his wife to the Emek Sara supermarket in Beersheva. He then headed to the other side of Beersheva to pick up his son from a horse ranch. “I decided not to cut through the city but to take the outer bypass road. When I got to Sara Junction the two, who were wearing kippot were standing there looking for a ride. They were carrying backpacks too. I told them where I was going and they said it would assist them so I took them” he added.

“I asked them if they are afraid to take ride close to nightfall. The boy who sat at my side said ‘what is there to be afraid of?’ I told them there was an incident a month ago at Tapuach Junction…We arrived at Chativat HaNegev Junction. They got off and thanked me. I am sorry that I was unable to take them to their destination. They said ‘thanks, its fine’”.

The information given to police by Maimon assisted in tracing the travels of the youths.

The Difficulties in Hebron:

Senior commanders explain the operation in Hebron is a most difficult one. Maariv quotes Lt.-Colonel Aviv Feigal saying “It is a difficult nut to crack” as the troops continue combing the streets, alleyways and each home. The densely populated PA area is a hostile environment for Israeli forces, an areas under heavy Hamas influence.

For the time being, the search continues as does the interrogation of close to 100 suspects taken into custody on Shabbos and motzei Shabbos in the hope of gaining clues to the whereabouts of the youths. Tefilos are being recited throughout Israel and the world.