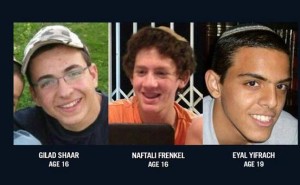 Authorities are speaking with ‘L’, a Gush Etzion region resident in his 30s. Authorities have learned that ‘L’ on Thursday night the eve of 15 Sivan, spoke with the youths, Naftali Frenkel, Gilad Shaar and Eyal Yifrach, who were standing at Alon Shvut Junction. According to the Walla report, he arrived at the hitchhiking post where the three were standing at 22:05. He reports they were holding bags and waiting for a ride.

“L” spoke with Yifrach, who approached the vehicle asking “where are you heading?” L stated “I am driving to Masuot Yitzchak”.

Yifrach smiled and declined. He told ‘L’ that he was seeking a ride to another direction. ‘L’ then drove off.