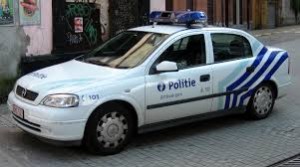 It appears the deteriorating security situation in Israel is serving to encourage Muslims in Europe to attack Jews. A few weeks following the fatal attack in the Jewish Museum in Brussels a school bus from the Antwerp Talmid Torah was attacked with stones by local Arab residents.

Security for Jewish institutions was increased following the museum attack with a focus on shuls and schools. Armed police can be seen patrolling in addition to private security in some area.

Baruch Hashem there were no injuries in this attack. Police were summoned to the scene.