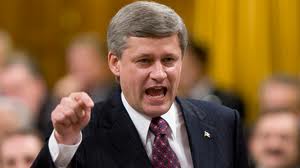 Despite repeated messages assuring the international community the White House remains committed to Israel’s security, President Barak Obama cannot bring himself to say what should be said and do what should be done as Israel’s major population centers are bombarded with terrorist rockets. Canadian Prime Minister Stephen Harper, a true friend of Israel, is not willing to sit quietly on the sidelines without citing the hypocrisy of the US leader as Mr. Obama called on Israel to show restraint.

Harper spoke of Israel’s right to defend herself, citing “It is Israel’s right and obligation” but the White House is too concerned with dispatching Secretary of State John Kerry to the region to impose a ceasefire. In actuality Harper gets it – that now is the time for the international community to stand firmly behind Israel with one united message, to please rid the world of Hamas and Islamic Jihad and permit the 1.8 million residents of Gaza to get on with their lives. Please remove Hamas from government and permit international donor funds to reach the people and permit Gaza to rehabilitate itself and elect a government that is not corrupt. Now is the time to rid the Mideast of Hamas, which refuses to recognize the State of Israel and vows to continue fighting until Israel is pushed into the Mediterranean.

“Failure by the international community to condemn these reprehensible actions will encourage these terrorists to continue their appalling actions,’’ Harper said in a rare Sunday statement. “Canada calls on its allies and partners to recognize that these terrorist acts [by Hamas] are unacceptable and that solidarity with Israel is the best way of stopping the conflict.”

PM Harper added his country mourns the death and suffering of innocent civilians in Gaza, but he understands the responsibility for those deaths falls on Hamas and its allies, not Israel. Mr. Harper criticized the UN as along with the US for they unwillingness to come out firmly and unequivocally in support of Israel’s military operation. Minister Stephen Harper has clearly emerged as Israel’s strongest and most unapologetic defender.