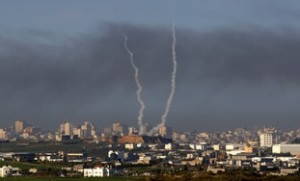 As Gaza militants continue to launch a heavy barrage of rockets at Israel, U.S. Senators Kirsten Gillibrand (D-NY), a member of the Senate Armed Services Committee, and Mark Kirk (R-IL) today announced that the Senate Appropriations Committee has appropriated approximately $621.6 million for the U.S.-Israel cooperative missile defense programs, including $351 million for the Iron Dome system that has proved very successful in protecting the people of Israel by intercepting short-range rockets and missiles from Gaza. In May, Senators Gillibrand and Kirk led a bipartisan letter to Senators Richard Durbin (D-IL) and Thad Cochran (R-MS), the Chair and Ranking Member of the Appropriations Defense Subcommittee, calling for full funding for U.S.-Israeli missile defense cooperation to ensure Israel’s national security.

“I stand with the people of Israel in this difficult time and firmly support Israel’s right to self-defense against rocket attacks by terrorists in Gaza,” said Senator Gillibrand. “This critical investment will go a long way towards protecting our nation’s strongest ally in the Middle East. We must continue to advance and strengthen the U.S.-Israeli cooperation on missile defense.”

“In recent weeks we have seen Israel’s Iron Dome save countless Israeli lives from Hamas rocket attacks,” Senator Kirk said. “Strengthening U.S.-Israel missile defense cooperation is critical to ensuring one of our closest democratic allies can defend itself from terrorism.”

Senators Gillibrand and Kirk wrote in the letter to Senate Defense Appropriations Subcommittee Chairman Richard Durbin and Ranking Member Thad Cochran, “We respectfully request that you fund U.S.-Israeli cooperation on missile defense to a level that will allow Israel to fully meet its national security needs… We urge you to fully fund U.S.-Israeli joint missile defense programs so that Israel can continue to develop and improve the three cooperative missile defense programs, and to purchase sufficient Iron Dome systems… to protect Israel’s population against a continuing threat.”

The Senators reaffirmed U.S. national security interests in supporting Israel’s ability to defend itself against missiles and rockets, including with continued support for the Iron Dome short-range rocket defense system and through joint cooperation on the Arrow Weapon System (with Arrow-2 and Arrow-3 interceptors) and the David’s Sling Weapons System.

The lawmakers pushed for full funding for the Iron Dome air defense system, which was developed in 2007 to protect Israel from short-range missile and rocket attacks from Lebanon to Gaza. In the past ten days, Israel’s Iron Dome air defense system has successfully intercepted missiles and rockets launched from Gaza, including one of three missiles that targeted Israel’s main nuclear facility in Dimona. In March 2014, the U.S. and Israeli governments signed a co-production agreement where components will be manufactured in the U.S., deepening cooperation on Iron Dome.

The Arrow-3 Weapon System is an exo-atmospheric interceptor to defend against the upper-tier, longer-range ballistic missiles being developed by Iran. The David’s Sling Weapon System, jointly developed by the United States and Israel, is designed to intercept short-range ballistic missiles, medium-range and long-range rockets, and cruise missiles.

The Senate appropriations bill will next go to the full Senate for debate and passage.