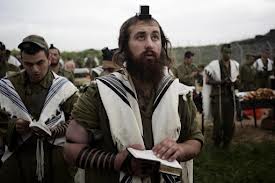 Tens of chareidi soldiers from the Netzach Yehuda Battalion (Nachal Chareidi) are among the soldiers and officers battling Hamas in Gaza. This includes a number of cadets in Officers Training School as well as Makim (NCO training), and Nachal Chareidi reservists.

Other Nachal Chareidi soldiers are stationed in the Menashe district, responsible for Tulkarem and Jenin, where the situation is tense as the battle wages in Gaza. The instances of firebomb attacks, rock attacks and violence are escalating.

The Nachal Chareidi non-profit affiliate and its rabbonim call on talmidei yeshivos and avreichim around the world to increase their tefilos and limudim for the well being and success of all IDF soldiers and Operation Protective Edge.