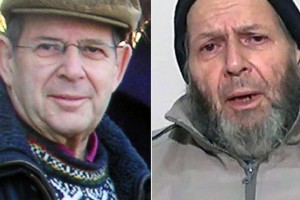 Al-Qaida urged the family of an American aid worker it abducted in Pakistan three years ago to demand that the U.S. government negotiate a prisoner exchange for his release.

Warren Weinstein was abducted in August 2011, four days before his seven-year stint as a business development expert with international aid agency USAID was to end. He turned 73 in July.

In a message released in English and Arabic and addressed to Weinstein’s family, al-Qaida said it is “not interested in keeping” Weinstein but wants to exchange him for prisoners in U.S. custody.

“We are not interested in retaining the prisoner in our protection. We are only seeking to exchange him in return for the fulfilment of our demands” it said. “We will not spare any efforts for the release of our prisoners.”

It criticized the U.S. government over alleged “inaction,” saying it had not contacted al-Qaida to negotiate for Weinstein’s release.

The authenticity of the message, which was dated August 2014, could not be independently confirmed, but it was posted Thursday on a website commonly used by militants.

The White House has called for Weinstein’s immediate release but has said it won’t negotiate with al-Qaida.

Weinstein appeared in a video sent in late December to reporters in Pakistan, appealing to President Barack Obama to negotiate his release. It was the first video to show Weinstein since September 2012. There was no indication of when it was made, but an accompanying, handwritten note was dated Oct. 3.

Weinstein’s family said at the time that the video and the note did not convince them that he was alive and expressed concern about his health.