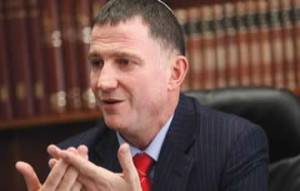 Knesset Speaker Yuli Edelstein does not plan to remain silent and plans to launch a campaign against a program that will involve 100 days of following and monitoring the activities and lives of MKs and cabinet ministers. Edelstein on Thursday 29 Tishrei will convene a meeting in his office which will include Knesset Attorney Eyal Yinon and other Knesset officials.

The speaker told Yisrael Hayom “I will not permit private investigators to follow MKs and cabinet ministers during my watch. The operating premise here is that all politicians are corrupt”.

The speaker plans to analyze the legal and public opinion aspects of the plan and he will work to amend it as required. He added he will take this as far as necessary, stressing he does not object to transparency but this does not mean that elected officials are not entitled to a measure of privacy.

Edelstein added “If the initiators of the project have evidence against any MK they should bring it to my office immediately and I will make sure the Knesset Ethics Committee probes the matter as request. Those behind this project have crossed a red line”.

The project is the brainchild of journalist Tomer Avital, who has already enlisted 1,600 people and 160,000 shekels via an internet site. The money will be used to pay private investigators who will follow public officials to determine what they do in their free time.

Avital explains the idea is not designed to check and inspect the MKs as the speaker perceives, but it is designed to see if their daily schedules include dedicating the time they should to their public responsibilities or if they dedicate their time to a small number of interest groups and not the general public. Avital adds the program is being carefully monitored from a legal perspective to ensure it functions within the framework of the law. “There will not be any eavesdropping or hidden photos taken in private places. The private lives of MKs and cabinet ministers are out of bounds”.