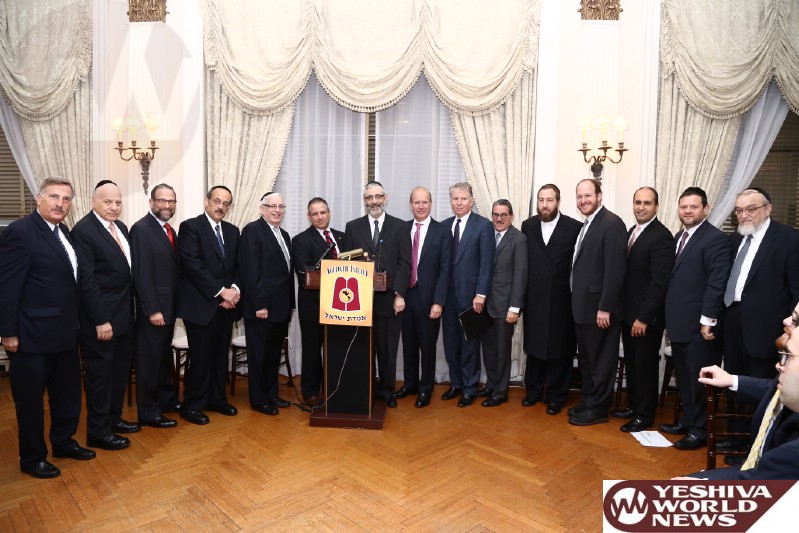 October 31, 2014 – New York – At Agudath Israel of America’s Annual Pre-Election Legislative Breakfast, Jewish community activists, legislators and law enforcement officials heard about the challenge of terrorism and its impact on New York City law enforcement. They were highly encouraged by reports of recent successes on our shores: preventions of attacks and indictments of terrorists and organizations that support them financially.

Held at the Down Town Association in Lower Manhattan, the breakfast was coordinated by The Friedlander Group and sponsored by Atlantis National Services, Inc. and MedReview. The two main speakers were Richard Frankel, FBI Special Agent in Charge of the FBI Criminal Division, previously in Charge of the Counter-terrorism Division, and Manhattan District Attorney Cyrus R. Vance Jr.

On the agenda as well was a tribute to the late Treasury Secretary Henry Morgenthau Jr. for his key role in establishing the U.S. War Refugee Board in 1944, during the waning days of World War II, which is credited with saving over 200,000 Jews. His grandson, Robert P. Morgenthau, represented the Morgenthau family and accepted the award on their behalf.

Abe Eisner, a friend of Agudath Israel and Chairman of the Board of HASC Center, noted the presence of Assemblywoman Helene Weinstein and praised her for her key leadership role, particularly in the area of special education which resulted in key policy changes impacting our community.

Joseph B. Stamm, Breakfast Co-Chair and CEO of MedReview, introduced Queens Borough President Melinda Katz, who in turn lauded Agudath Israel for its powerful voice in defending Israel and standing against anti-Semitism.

Radni Davoodi, founding partner of Atlantis National Services, Inc., and an Iranian Jew who found refuge and success in the United States, expressed gratitude to this country and introduced District Attorney Cy Vance.

DA Vance said that as the world financial center, New York City has a special place in the struggle against terrorism. His office, with a staff of 530 lawyers and a workload of over 100,000 cases a year, has become a home for counter-terrorism. He prosecuted seven major cases against financial institutions that violated United States sanctions and financed terrorist regimes. BNP Paripas, a French bank, was fined 8.9 billion dollars for financing the Sudanese, Iranian and Cuban regimes; a large portion of those funds were used for counter-terrorism equipment for the New York Police Department.

The challenge, Mr. Vance said, is in finding radicalized individuals who aren’t tied formally to Al Quaeda, such as Zarein Ahmedzay, indicted for planning to explode a bomb in the New York City subway system. Attendees took strength, no doubt, from DA Vance’s assertion that “our office, in partnership with the Federal government, is better prepared than ever to fight terrorism.”

Peter Rebenwurzel, Chairman of the Raoul Wallenberg Centennial Celebration Commission, which led the efforts to award Raoul Wallenberg with a Congressional Gold Medal this past summer, spoke of the significance of this year being the 70th anniversary since the establishment of the War Refugee Board by Henry Morgenthau Jr. The Board recruited Raoul Wallenberg to save the remnants of Hungarian Jewry. He also spoke about the prevalence of anti-Semitism even at the highest level of US government which prevented the rescue of European Jewry with the notable exception of Mr. Morgenthau who felt that the overwhelming evidence of the Holocaust could no longer be ignored, and persuaded President Roosevelt to establish the board.

Robert Morgenthau, son of the legendary former Manhattan DA Robert Morgenthau Jr., spoke movingly of his grandfather’s quest to save lives. A silver charity box was then presented to the Morgenthau family by Mr. Werdiger in the name of Agudath Israel and the Holocaust survivors and their families.

Rabbi Abe Friedman, a community leader and law enforcement chaplain who enjoys a close working relationship with the FBI and works closely with Agudath Israel, introduced Special Agent in Charge Frankel, and praised him for thwarting the Bronx Synagogue bombing.

Special Agent in Charge Frankel said that since 9/11, the FBI has become a major force in counter-terrorism. One key was the growth and greater efficiency of the Joint Terrorism Task Forces (JTTF), which pair the FBI with other law enforcement agencies. Started in 1970, there are now over 100 JTTFs nationwide, with more than 4,000 members (over four times the pre-9/11 total).

Finally, SAC Frankel voiced concern over proposed legislation that would allow much stronger encryption by technology companies such as Google, preventing access to information that has saved lives in the past.

In closing, Agudath Israel Board Member Chaskel Bennett passionately illustrated that even a handful of votes can determine the outcome of an election and urged the community to exercise its communal responsibility and vote. 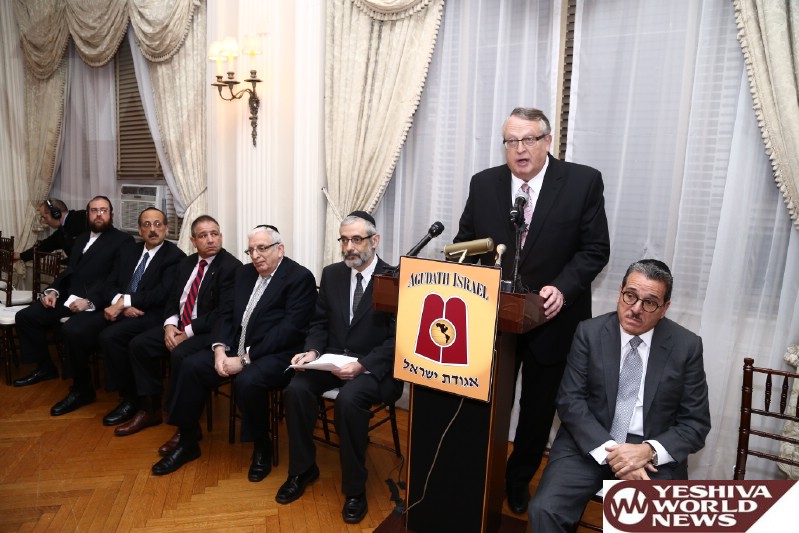