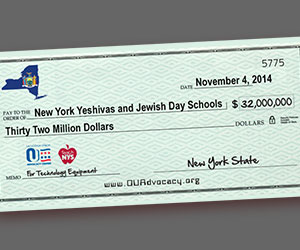 The Orthodox Union is urging New Yorkers to vote yes on Referendum #3: the Smart Schools Bond Act of 2014, when they step into the voting booths on Election Day, Tuesday, November 4.

If passed, the Smart Schools Bond Act can provide up to $32 million to New York’s 130,000 yeshiva and Jewish day school students to buy much-needed technology equipment.

“The OU Advocacy team worked tirelessly with state legislators and the governor’s office to ensure that non-public schools would be included in the Bond funding. But we need all New Yorkers to help get the Smart Schools Bond Act across the finish line by voting yes for this important referendum,” said Jeff Leb, New York State Director for OU Advocacy, the non-partisan public policy arm of the Orthodox Union.

“It is imperative that the Jewish community goes to the polls on Tuesday and votes. If we want our officials in Albany to help us, our communities and our Jewish day schools, then we must show them that we are involved in the electoral process. When we vote, we prove that we care about who represents us and which issues they support and pursue,” added Leb.