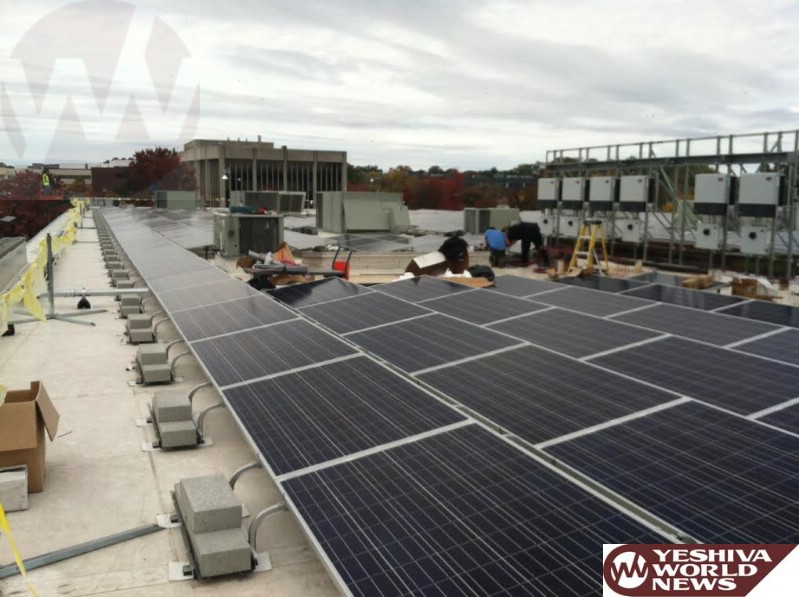 Yeshivat Noam, an Orthodox Jewish Day School in Paramus, New Jersey, announced today that it is making the switch from conventional energy to clean, renewable solar energy. The Amberjack Solar Energy Company of Oakland, New Jersey, is currently installing 1,512 solar panels on the roofs of Yeshivat Noam’s two school buildings. Yeshivat Noam is the first Yeshiva Day School in Bergen County, New Jersey and among the first Yeshiva Day Schools in the United States to make the switch to solar energy.

The Yeshivat Noam Finance Committee and other parents and community members have been working on this exciting project since 2011. In a mutually beneficial arrangement, Amberjack installed the system at no charge to the school. Yeshivat Noam will buy power generated by Amberjack, which financed the system at overall rates that are lower than the school presently pays to the local energy company. Currently, the Yeshivat Noam campus requires over 800,000 kilowatt hours (kwh) of energy per year. The solar panels are projected to produce about 400,000 kwh, or half of the current needs, at a savings of about $30,000 to the school budget each year.

“It is a win-win situation,” said Yeshivat Noam Principal Rabbi Chaim Hagler. “The switch to solar energy not only makes sense financially and environmentally, but it also provides tremendous learning opportunities for our students.”

Students at Yeshivat Noam are getting firsthand experience with alternative energy as their school goes green. In September, Aliza Wasserman, Program Director of Energy and Environment for the National Governors Association Center for Best Practices (a bipartisan think-tank), spoke to the school’s Third, Fourth, and Eighth Graders about the effects of climate change. Ms. Wasserman, who shared her excitement with the students that Yeshivat Noam is taking a leading role in renewable energy use, also gave the Eighth Grade a gift of six solar panel-motorized toys to begin their investigation of solar energy use.

Yeshivat Noam Middle School Science Teacher Mrs. Barbara Sehgal noted that the school’s Eighth Grade science curriculum focuses on how energy flows through living and non-living systems. Throughout the year, students will learn how solar energy works and will be able to monitor the energy production from the solar panels and their impact on the environment. This information will be broadcasted and updated every 15 minutes on the large video monitors in both the Elementary and Middle School lobbies.

“Collecting data in real time is a wonderful project-based learning opportunity,” said Yeshivat Noam Middle School Assistant Principal Mrs. Becky Troodler. “As students analyze the data, they will become educated consumers enhancing the decisions that they will make as future leaders of our community.”

With over 800 students, Yeshivat Noam is an Orthodox Jewish Day School that focuses on excellence, innovation and inspiration in Jewish life and academics.