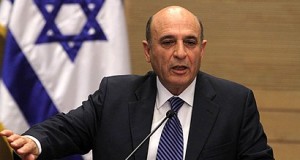 Speaking with the Knesset Channel, Kadima leader MK Shaul Mofaz announced his party would not enter a coalition headed by Prime Minister Binyamin Netanyahu. The former defense minister’s comments follow the resignation of Environmental Affairs Minister (The Movement) Yair Peretz and another announced threat to bring down the government by Finance Minister Yair Lapid, over the state budget.

Mofaz is a former senior Likud minister, having served in the past as minister of defense. All recent polls show his 2-seat Kadima party will not earn the new minimum threshold to enter Knesset in the next elections, which will be four seats.

Mofaz is critical of Mr. Netanyahu’s handling of security affairs, especially the issue of Jews on Har Habayis. He also feels there has not been a strong enough presence of security forces in Arab areas and this has opened the door to today’s worrisome deterioration in security in many areas including Yerushalayim.

Mofaz warns the terrorism will continue to spread until the administration begins responding appropriately, by preempting the attacks before they strike out at Israel. He feels Israel must respond firmly now to prevent another intifada, citing it is not sufficient to sit back and deny an intifada is underway.